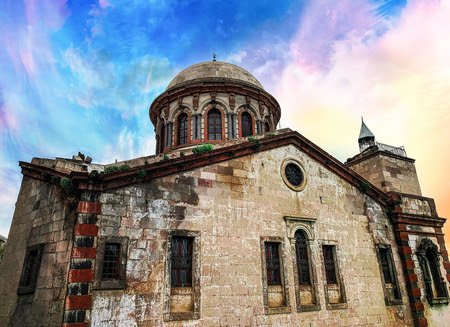 In Turkey, Attacks on Churches Spike as Christians and Minorities Are Blamed for COVID-19

A satellite television broadcaster in the Middle East is using its unique platform to show that Christians are not a threat as angry protesters attack churches and some blame Christians for COVID-19.

After a recent arson attempt on a church in Istanbul — Turkey’s largest city — the suspect told police that he wanted to burn down the church because, he said, Christians and other minorities “were responsible for COVID-19.”

At another church in the city, protesters tore down the cross — a sign of rising tensions and social unrest in a nation that’s become increasingly hostile to Christianity.

SAT-7 TURK — the only Christian network broadcasting every day in the Turkish language — is encouraging local Christians to respond to the attacks and persecution by “living out their faith with love and taking the path of peace.”

The latest attacks come amid varying reports that the US troop pullback in neighboring northeast Syria last fall created a “vacuum” that allowed Turkish-backed militants to persecute Christians and other minorities, causing thousands to flee from their homes. This follows President Trump’s Executive Order advancing religious freedom around the world.

“We know first-hand the climate of hatred and its devastating effects on Turkey and on the churches exposed to it,” Turkish presenter Senem Ekener said. “We aim to counter that with lives that reflect Christ.”

Slammed by soaring unemployment and coronavirus-related financial hardships, some Turks have been looking for a scapegoat to vent their anger — putting Christians and other minorities in the direct line of protests.

“The pandemic has created fear and frustration in Turkey, with Christians sometimes being blamed for the problem,” said Dr. Rex Rogers, president of SAT-7 USA (www.sat7usa.org), a Christian network that broadcasts 24/7 in local languages across the Middle East and North Africa, using local presenters.

‘Everything Has Been Taken Away’
“The current situation is so fragile… everything we trusted has been taken away,” said co-presenter Volkan Er, referring to mass job losses and uncertainty in the nation of 84 million where less than one percent of the population is Christian.

Even before the pandemic and related business lockdowns, Turkey’s unemployment rate hovered around 13 percent, with many families living on the edge. In recent weeks, reports of domestic violence have increased as desperation sets in.

During the health crisis, SAT-7 has seen interest in its social media channels skyrocket, as anxious Turks look for answers in the Christian faith and the lives of believers.

Launched in 1996, SAT-7 (www.sat7usa.org) — with its international headquarters in Cyprus — broadcasts Christian and educational satellite television programs to more than 30 million people in the Middle East and North Africa. Its mission is to make the gospel available to everyone, and support the church in its life, work and witness for Jesus Christ. SAT-7 broadcasts 24/7 in Arabic, Farsi (Persian) and Turkish, using multiple satellite channels and online services.

1 thought on “Turkey: Attacks on Churches Spike as Christians Blamed for COVID-19”