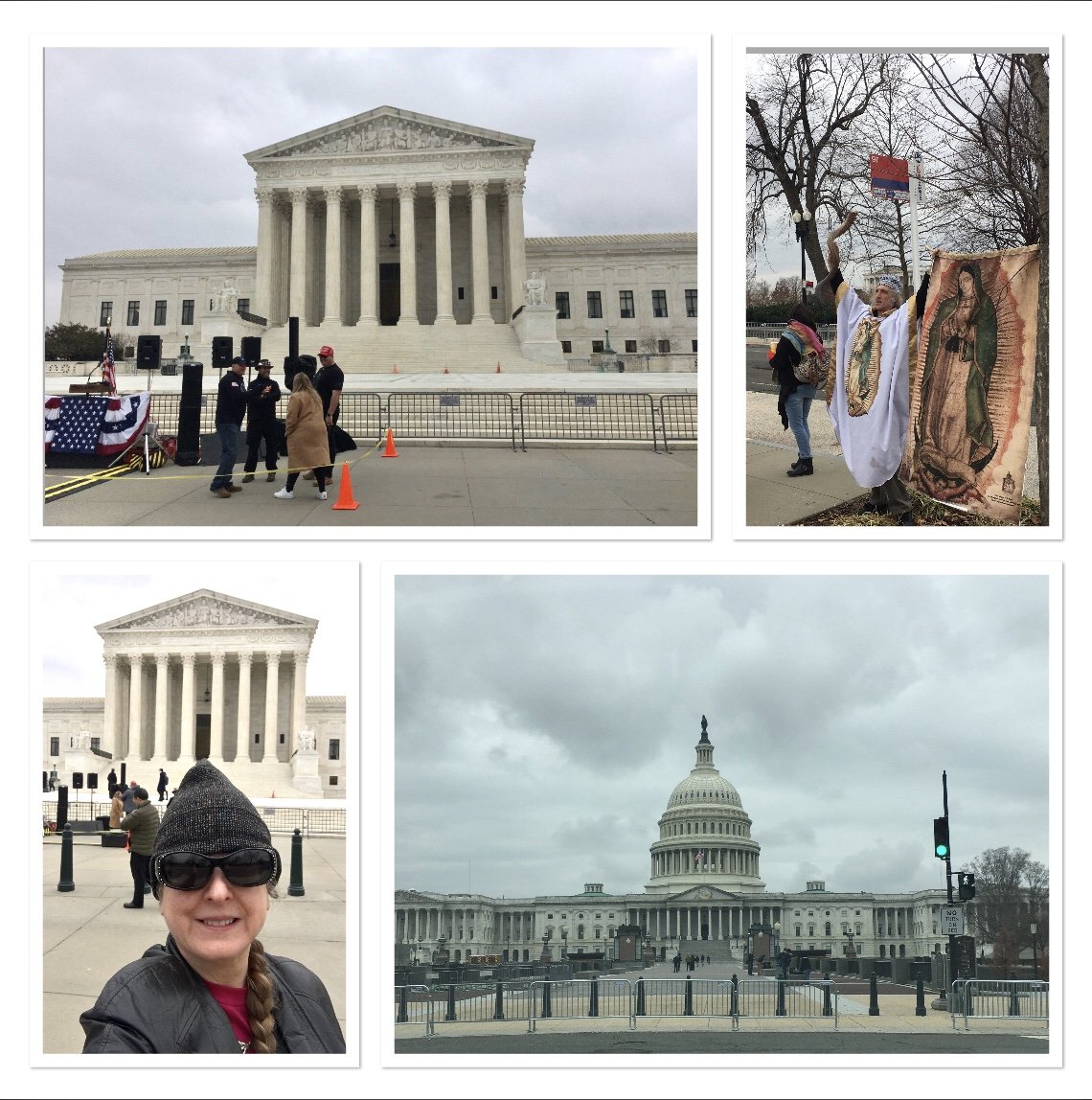 Tuesday morning, January 5 dawned as sullen as the reporters on CNN. Cold and drizzly, the day was already starting to brighten up and dry off as we entered Washington, D.C. Although the official Trump MAGA March doesn’t begin until tomorrow morning, the Trump Rally already had activities going on as people began to flock to the Nation’s Capitol to express their displeasure over the massive voter fraud during the 2020 Presidential Election.

A truck with a banner proclaiming that Trump has already won was parked on an overpass in the Nation’s Capitol, and several vehicles with Trump flags were already on the streets almost two hours before Tuesday’s events began. Around the Capitol Building and the Supreme Court Building across the street, the summoning sound of the shofar horn could be heard as we arrived.

A small red, white and blue stage was being set up in front of the Supreme Court building at 10 am, and small crowds were already gathering at the Capitol Building and the Supreme Court Building. In addition to the shofar horns, an eclectic mix of music filled the air from speakers at the stage: Amy Grant’s “Sing Your Praise to the Lord,” Johnny Cash “I’ve Been Everywhere,” and Lee Greenwood’s “God Bless the USA.” The people already gathered sang along, talked and laughed quietly, and took photos. Another gathering was forming at Freedom Plaza near the Capitol at the same time. Yellow “Don’t Tread on Me” flags could be seen.

Jan. 5 events include a Supreme Court Blessing and Jericho March around the Capitol Building, a Save the Republic Rally, a Prayer Walk starting at the Lincoln Memorial, and a One Nation Under God rally.

At the March of Jericho around the Capitol, that had police in groups of four standing around, reports Mark C. from Nashville, who only saw two National Guardsmen.

“They gave a series of powerful speeches at the Freedom Plaza,” Mark says, stating that some of the topics included Coronavirus, election fraud, abortion, freedom, prayer, and American patriots. He lists some of the top quotes of the day as:

The mood has been peaceful, prayerful, positive and patriotic all day. In light of how peaceful the event has been today, having the National Guard, called out by the Mayor of D.C., seems like a bit of overkill. Trump rallies are traditionally well organized and well behaved until Antifah and BLM arrive, a fact CNN and other mainstream media always fail to mention. (See Interesting Trivia below.)

We have three reporters in the field and will continue to provide coverage of this historic event as we get reports in. Our coverage will continue tonight as our reporters check in and we will cover the main events tomorrow. Check back for daily updates and don’t miss our photo gallery.

Plenty of police were in sight as all the roads leading into Freedom Plaza were blocked by police cars and other vehicles. At the time of this update, there were no reports of any problems or violence, and I was personally in the area around Freedom Plaza tonight until 6pm.

However, some on social media were posting posting warnings about possible plans for upcoming violence against the gathered Patriots.

Stay tuned for more updates and full coverage tomorrow. We may not be as big as CNN, but in our favor, we are not controlled by a powerful conglomerate that dictates what spin we must put on all of our stories.

Interesting Trivia: Did you know that five huge conglomerates, owned and operated by socialists and left-leaning businessmen, now control over 90% of the mainstream media? 1.