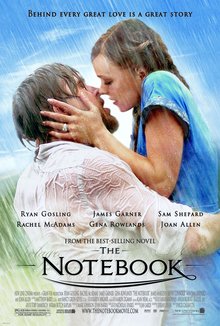 The 2004 movie The Notebook starring Ryan Gosling, Rachel McAdams, and James Garner, was a box office was a box office hit.  based on the 1996 novel of by Nicholas Sparks, the film tells the story of a Allie (Rachel McAdams), a rich young woman, who falls in love with a Noah (Ryan Gosling), young man beneath her social status in the 1940s. Their social differences and Allie’s mother eventually separate them, but Noah never stops loving Allie, nor does he ever give up on their dream of restoring the Windsor Plantation and making it their home.

The story of Allie and Noah is told by an elderly gentleman (James Garner) who reads the story from his notebook to a woman who is a fellow patient in a nursing home. Spoiler Alert: Of course, it turns out that it is really faithful Noah reading Allie their own love story after Allie develops dementia.

One of the pivotal moments in the movie is when Allie discovers that Noah has restored the Windsor Plantation to her specifications like he promised her he would when they were young. The movie shows the run down plantation that Allie and Noah explored in their youth, and then the beautiful restored mansion that Noah built to bring the love he felt for Allie alive. But how did Noah accomplish such a daunting task?

To find out, visit the new 3D interactive before and after graphic all about the house in The Notebook. This impressive detailed graphic walks viewers through everything from structural renovations, to landscaping, to adding blue shutters to the freshly painted house.

Who Is Nicholas Sparks?