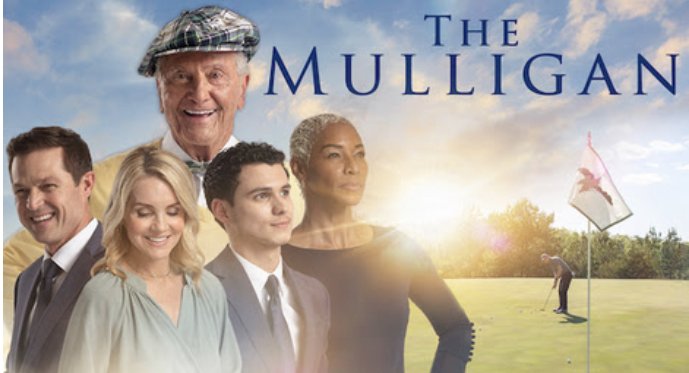 After a successful nationwide theatrical release, Cinedigm is releasing the faith and family film The Mulligan today On Demand, Digital and DVD.  Based on the inspirational novel by Ken Blanchard and Wally Armstrong, the film follows a man trying to right the wrongs of his past as he learns that the game of life is best approached with a clear head. The powerful film about second chances stars Eric Close (AMERICAN SNIPER, Nashville), Pat Boone (A COWGIRL’S STORY, GOD’S NOT DEAD 2) and Tanya Christiansen (I STILL BELIEVE, THE HATE U GIVE).

Outwardly, Paul (Close) has everything that he could possibly want. He’s a successful businessman, motivational speaker and superstar on the golf course.  But behind the persona, his world has fallen apart and his estrangement from his family has left him desperate to find anything to fill the void.  When he gets teamed up with an old golf pro (Boone), Paul begins to realize that there is still time to set his world right…there’s still time for a mulligan.

Directed by Michael O. Sajbel (THE ULTIMATE GIFT, THE RIDE) the film reflects on the idea that having everything isn’t everything and that the game of golf and the game of life have a lot in common. From taking the good shots with the bad, to knowing when to chip it and knowing when to rip it, we all look back at things we could have done differently.

The inspiration for the film came from the early life of co-author PGA touring pro Wally Armstrong, who, like Paul, was mentored by a club pro at his hometown golf course. Originally an idea for a children’s book, Armstrong and Blanchard created a deep and meaningful novel that has been enjoyed by young and old, where golf is more than just a game and second chances are never out of reach. THE MULLIGAN movie released today on DVD and on streaming platforms