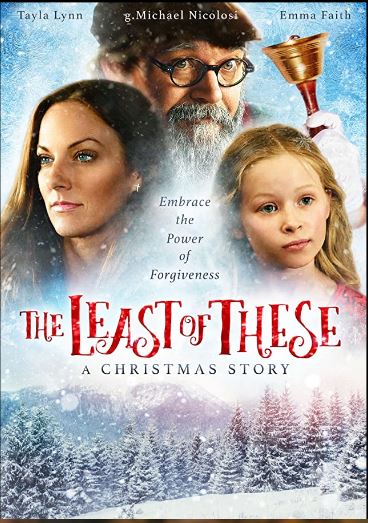 Rose (Tayla Lynn) and her 7-year-old daughter Katy (Emma Faith) are struggling during the holidays. They live in their car (but Katy inexplicably has braces in spite of their homelessness). They might be poor in wealth, but they are rich in faith, and they end each night with a prayer. As the movie begins, mother and daughter are talking about the true meaning of Christmas–Jesus.

When a Salvation Army Santa named Charlie tells Katy about his home in the North Pole, Rose takes Santa to task, telling him not everyone believes in Santa, not do they need to. Rose’s waitress friend Dot tells Santa that Katy hasn’t had a Christmas because of their financial hardships. However, Katy believes in Santa and gives Charlie her letter to Santa with her Christmas wish–a home–and this causes Charlie to have a crisis of conscience.

At first Charlie wants to turn away from being a Santa, but as he walks down the street and a child happily greets “Santa,” Charlie realizes he can choose to be Santa. He tells his wife that Santa is “a man put on this earth for a little girl to believe in when she’s got nothing else going on.”

In addition to being a waitress, Rose also sells her paintings at the diner, trying to earn money for a better future for Katy. When Charlie invites Rose and Katy to be his guests at an elegant dinner party, will their fortunes start to change?

Look for me as a Christmas party guest in “The Least of These.” (credited as Kathryn Darde)

“The Least of These” is refreshing, because it does not stick to the typical Christmas movie formula although it has many of the same elements and is full of Christmas cheer. The story continues to move forward after a couple of “obvious” stopping places which makes the movie seem a bit longer than its 102 minutes. However, it does come to a satisfactory conclusion.

The movie is very much a faith-based, family-friendly film with solid acting from the main cast. Little Emma Faith is adorable as Katy. “The Least of These” is a movie about faith, determination and a mother’s love. I was pleasantly surprised by the film and its wholesome message and recommend it for family viewing. I found the movie on Amazon Prime where it has a 4 1/2-star rating..