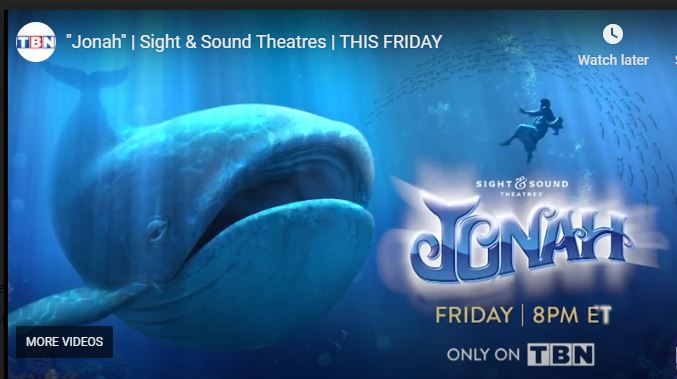 With Broadway on Hiatus, TBN Premieres Smash Hit Theater Production of ‘JONAH’ in Exclusive Broadcast Debut for One Night Only This Friday

Social distancing measures and restrictions on large gatherings have made live theater all but impossible in most places, so TBN is bringing the stage to Americans’ living rooms.

Filmed in front of a live audience, JONAH has been seen by more than two million people on stage, and is scheduled for a one-night-only event on TBN. This follows the success of TBN’s Easter weekend broadcast of the stage production of ‘Jesus.’

Based on the well-known Bible story, the Sight & Sound Theatres production follows the Old Testament prophet Jonah as he runs away from a special assignment God has given him. After a series of wild adventures involving a seaport called Joppa, a huge boat, and a terrible storm, Jonah finds himself in the belly of a giant fish. But that’s not the end. It’s here that God teaches Jonah how to receive grace and extend mercy—even to his archenemy, Nineveh.

Families are invited to experience this original state-of-the-art production of JONAH in its special worldwide television debut exclusively on TBN Friday, August 21 at 8 p.m. /7 p.m. central, and on-demand through the TBN app, August 21-23 only. CLICK HERE to download the TBN app for Apple or Android devices.

About TBN
TBN is the world’s largest and most watched faith-and-family broadcaster, reaching over 175 nations across the earth with inspirational and entertaining programming 24 hours a day in 14 languages and on 32 global networks.

About Sight & Sound
Sight & Sound® is a ministry on a mission to bring the Bible to life through live theater, television, and film.