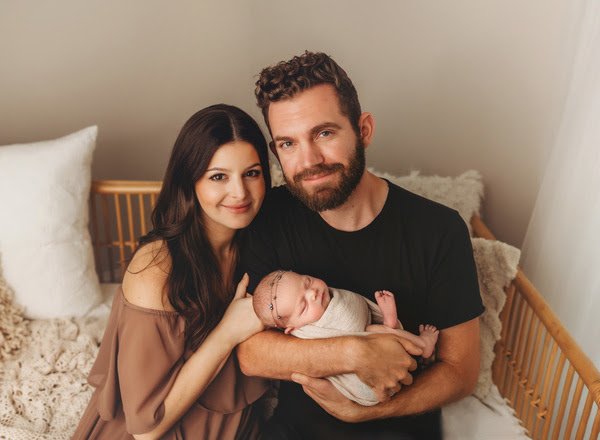 Skillet‘s guitarist Seth Morrison and his wife Hillary welcomed their first child, daughter June Noelle on August 16, 2022.  Weighing 8lbs, 2oz and 20” long, the couple couldn’t be more excited about the new addition to their family.

“Hilary and I are overjoyed and immensely blessed to welcome June to the world,” Morrison remarked. “God has given and entrusted us this child to shepherd and we couldn’t be more thankful.”

Following her birth, they are also sharing their personal story and struggle behind being able to conceive, and ultimately, the power of prayer:

“June is truly a testament to the power of prayer as His children interceded and prayed alongside us,” Seth recalls. “We had been trying to conceive for close to 2 years and had begun next steps to uncover potential causes of infertility. We planned for Hilary to have exploratory laparoscopic surgery in January. Obviously something like this is personal, and we are generally private people by nature so we hadn’t shared this struggle with anyone. It was September 2021 and we were starting our fall tour in Chicago, and I opened up to John, Kor, Jen, the leaders in each of our churches, and close family letting them know where things stood and they immediately started covering us in prayer.“

“Although I often prayed for answers and healing, and that God would fulfill the desire for a child, I also prayed specifically for full satisfaction and contentment in Him, whether that was in His plan for us or not,” Hilary says. “I wanted to be expectant of God’s blessing but not just ‘waiting’ for fulfillment. During this time, Korey poured into me and reminded me about Hannah (Samuel’s mom)—how she had a great situation with a husband who loved her, but despite it all she wouldn’t be content until God blessed her. I read Hannah’s prayer in 1 Samuel 2 repeatedly.”

“Fast forward to November, we were visiting my family in Ohio and Hilary got a positive pregnancy the morning after Thanksgiving,” Seth continued. “We love sharing this journey of God’s goodness and faithfulness and hope it touches someone who reads it. We can rest and know His timing and plan is always perfect. June is the sweetest gift—she has brought so much joy to our lives and is a constant reminder of the power in prayer.“