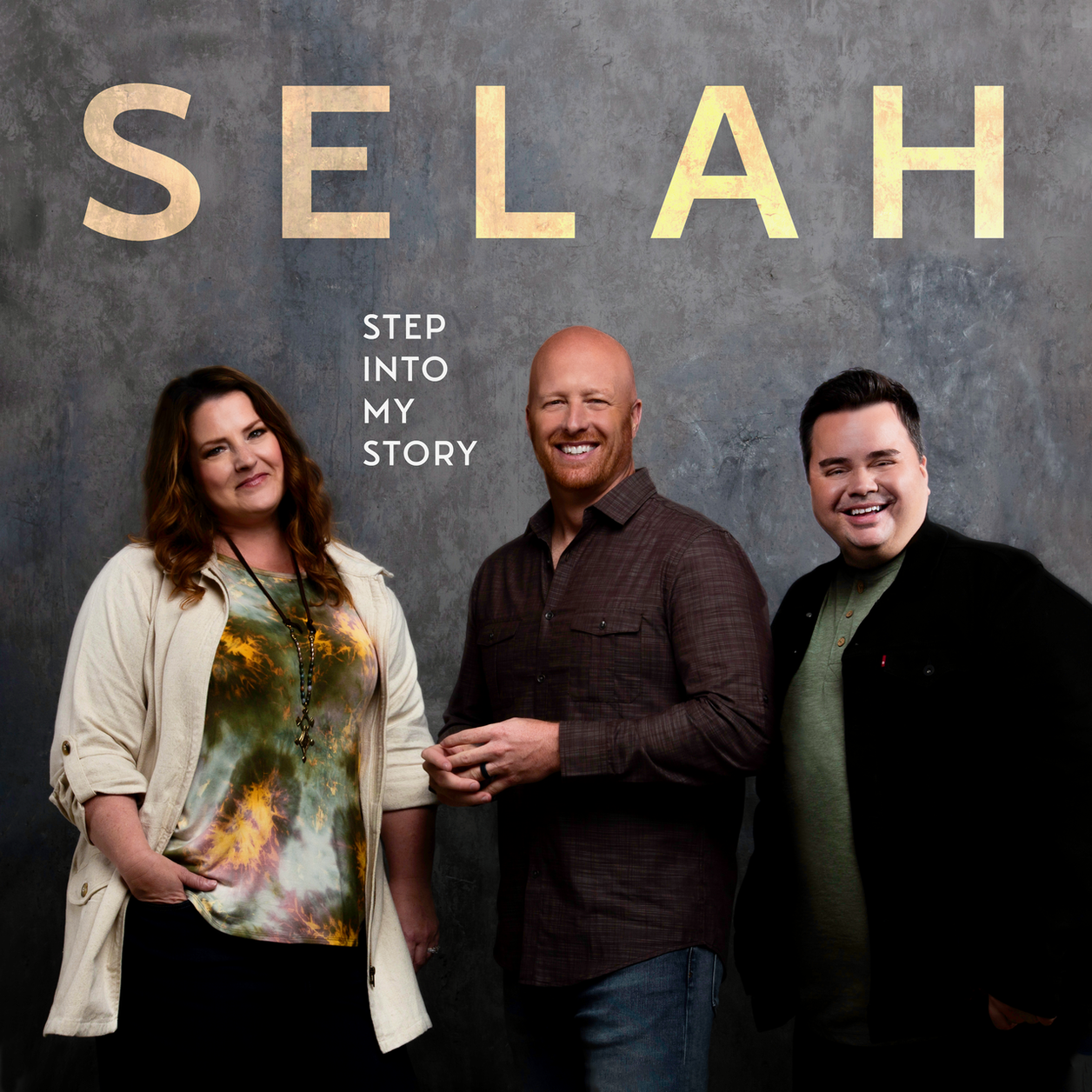 Reflecting Influences from the U.S., Congo and India, Selah’s Music and Outreach Pours Out on Nov. 6 Album, ‘Step Into My Story’

Selah means “pause” in Hebrew — a concept which plays a thematic role in this group’s new album, Step Into My Story (Nov. 6, 2020 via 3Cre8tive). Released on their newly-formed label, the group’s 16th album invites listeners to pause, reflect and share their own stories.

Dove Award-Winning Group Celebrates Change, Invites Listeners to Share Their Stories As They Pause Amid Today’s Busy And Stressful Climate

“Our band name means ‘to pause’ — we borrowed it from the Psalms, and it’s appropriate for us right now because we literally paused, reevaluated our past, thought through next steps and are moving forward with the most incredible team and fan base anyone could ask for,” says Selah’s Todd Smith.

Allan Hall agrees, “These songs are personal and, because of COVID-19, we had time off the road to tighten things up — both personally and professionally. My personal journey includes losing more than 75 pounds and feeling healthier than I ever have; all of us have taken steps to see and create positivity during this time. We’re looking forward to hearing our fans’ stories!”

“I never thought I’d be homeschooling while releasing an album, and moving — but here I am!” says Amy Perry. “This record is our debut as label founders and there’s such a freedom and joy in this. Like seeing your child take their first steps. Like Allan said, we are here because of more than 23 years of music and incredible fans who allow us to do what we love doing.”

It’s not just a job — it’s a calling. Todd was raised in Congo, Africa, and is still involved with the Laban Bible Institute that his family founded over 40 years ago, and whose students have planted over 400 churches. His parents also started a medical dispensary, a women’s literacy program, and a radio station that has a potential reach of 8 million people. In addition, he and the band also support OneChild.org, a child sponsorship organization based in the U.S. that, to date, has served more than 14,000 children across 14 countries.

One of these children is Marcus Rixon. Now 33, Marcus was born into poverty in Kolkata, India. He was sponsored through OneChild for 14 years, and received an education, food and clothing. In August 2010, he bought a plane ticket to the U.S, and with only $50 in his pocket, boarded his first-ever flight — traveling from Kolkata to London, London to Chicago, Chicago to Louisville, and then drove to Wilmore, KY where he attended Asbury University and earned a Bachelor’s degree.

“Talk about full circle!” says Marcus. “Being sponsored by the same organization that the artist you manage helps raise funding and awareness for — it’s incredible. If anyone ever doubts the validity of a sponsorship program, OneChild is the reason I’m here and I’m beyond grateful to Selah for their diligence and constant support on behalf of children like me.”

With Step Into My Story releasing the same week as our nation’s presidential election, the 8-time GMA Dove Award-winning band is hoping its songs offer a sense of unity and a reason to pause, take a breath and reflect.

The first track, “Step Into My Story,” is available at DSPs now, and the album releases November 6.

Tune in to TBN at 7PM CT on October 30th to find out if Selah will pick up one or both of its 2020 Dove Awards for last year’s offering, Firm Foundation (Integrity Music).

To find out more about Selah, please visit: https://selahonline.com/

Selah | Step Into My Story
For a beloved group that has forged a strong connection with its audiences over more than two decades, recording a new project can be like walking a creative tightrope. There’s always the desire to be innovative and serve up something new and different, yet there’s a responsibility to give the audience what they’ve come to love and expect or risk losing members of the faithful following. Few artists successfully navigate those two expectations better than Selah. The veteran trio prove it again on its 16th album Step Into My Story, an engaging collection that blends potent new songs with beloved classics delivered from a fresh perspective. With more than half-a-billion streams, over 4 million albums sold, and 8 GMA Dove Awards to their credit, Selah’s Allan Hall, Amy Perry and Todd Smith have earned a reputation for not only delivering compelling new anthems but also for reviving great hymns of faith. With their soaring harmonies and distinctive lead vocals, they have breathed new life into timeless musical treasures that have ministered to believers for generations.  Released on newly-launched record label, 3Cre8tive, Step Into My Story continues the Selah tradition of updating revered hymns and introducing powerful new songs of inspiration for times such as this.

AMY PERRY | SELAH
Best known for her effortless yet powerful vocals from the acclaimed, Dove Award-winning group Selah, Amy Perry has become the longest-running female member of the talented trio. Perry joined the group in 2005 and has now become an integral part of the “Selah sound.”

“I always sang in church, and had always wanted a record deal because I knew I was born to sing. It wasn’t until I met Todd and Allan and heard Selah, that I realized how much I really wanted a career in Christian music; not just to have the record deal, but to really make a difference in people’s lives,” says Perry in a 2019 CCM article. “I remember my very first show with them – people coming through the autograph line one after the other, sharing how [Selah’s] music had so deeply touched their lives. That’s when I knew I was where God meant for me to be.”

Perry also released a solo album in 2014 titled “Glory All Around” and does numerous speaking engagements for women’s events where she captivates attendees with her down-to-earth speaking style and, of course, her singing. “I’ve been through some stuff that hurt me and left me feeling worthless,” Perry says. “If sharing that helps someone realize they are beautiful and of value, then I’ll share it forever.”

“If there is one thing to add to your bucket list it is to hear Selah’s live rendition of ‘Amazing Grace,’” says longtime Selah producer Jason Kyle Saetveit. “After hearing that song, you will know all there is to know about Amy. She wows you with her powerful, God-given gift of singing and draws you in with her authentic presentation. She is a natural talent.  When you have the joy of seeing her (and all of Selah) at a live performance, you feel that she is singing for and with you, not at you. That is the mark of a naturally gifted performer and worship leader. Even though she is a world-class vocalist, you don’t feel it is all about ‘her’ as much as about the audience, the song and God.”

ALLAN HALL | SELAH
Best known as the tenor on the ivory keys from the critically-acclaimed, Dove Award-winning group Selah, Allan Hall has quietly etched his way into the hearts of music lovers for more than twenty years. Allan offers his own very personal, genre-defying mix of songs about life.

Allan’s parents recognized a love of music and a keen ear in their son early on. As a child, his musical diet was comprised of everything from bluegrass and gospel to rock, pop, R&B, country, and classical. When he turned 7, Allan’s parents surprised him with an old upright piano and he spent a great deal of time fine-tuning his piano playing by ear. He learned songs by listening to his parents’ records and from hymns he heard in his family’s home church.

When Allan moved to Nashville to attend Belmont University, he continued to hone his talent serving as an accompanist for aspiring artists at the school. Getting his first taste of life in the spotlight, Allan spent a summer playing for a country music revue at Busch Gardens in Williamsburg, VA. He was also a member of the country band Caney Ridge. Before disbanding in 1998, Caney Ridge performed regularly and had opened shows for Clay Walker and Sammy Kershaw.

Another of Allan’s dreams came true in 2004 when he signed his solo record deal with Curb Records and released his first album, House of a Thousand Dreams.  In 2014, he released a second project, Work of Love.

He continues to record with Selah and as a solo artist.

TODD SMITH | SELAH
Art is often birthed from struggle. Expressing the heart’s most vulnerable emotions can be both cathartic and beautiful, as history has proven time and again. For one of Christian music’s most prolific vocalists, Todd Smith, life has undoubtedly inspired his art. While the depths of suffering, including the loss of a child and a serious illness, have profoundly affected Todd and his family, he’s emerged with an unquenchable thirst to create—to make music, offer hope, and challenge complacency.

“There have been so many times that I’ve been in a place of depression and anxiety, overwhelmed and wondering how to make it through,” says Todd. “Looking back, I can clearly see how God has provided hope and brought me through time after time.”

Surviving malaria as a teenager growing up in Congo, Africa, where his family served on the mission field, Todd experienced God’s faithfulness in the midst of what seemed like a hopeless time. Years later his faith would be tested again when he and his wife, best-selling author and speaker Angie Smith, suffered the loss of a child. Their fourth daughter, Audrey, spent a mere two and-a-half hours cradled in her parents’ arms before God called her home. “It was one of the most horrific things I’ve ever been through,” Todd says. “I didn’t know how our marriage would survive or how I would even get through. I had to beg for the strength to believe and trust that He would pull us through the nightmare. You never want to think that God wills bad things to happen, but I do believe there is a purpose for all things, and He can and will use any circumstance for His glory. And I know when I get to heaven I will fall down and worship at the feet of Jesus and then rise and say, ‘Where is she?’ I will find my little girl and spend eternity by her side.”

While his family is by far Todd’s most important priority, he’s also an advocate for Christians living in persecution. “Four years ago, I was asked to write music for a documentary based on the book,  ‘The Insanity of God,’ by Nik Ripkin,” Todd says. “It lit a fire in me to care about a group of people I had never given much thought to before.” “Dmitri’s Song (Jesus Is Alive)” is devoted to the plight of the persecuted Church. Penned by Todd, along with Ed Cash, the song poignantly recounts the true story of a Russian pastor imprisoned for his faith for 17 years, showing unfathomable courage in the face of torture.

“Life will always have challenges,” Todd concludes. “The Bible tells us we will have troubles. But it also assures us that we will never be forsaken. Even in our darkest hour, the Light of life, love and grace never flickers or dies out.”