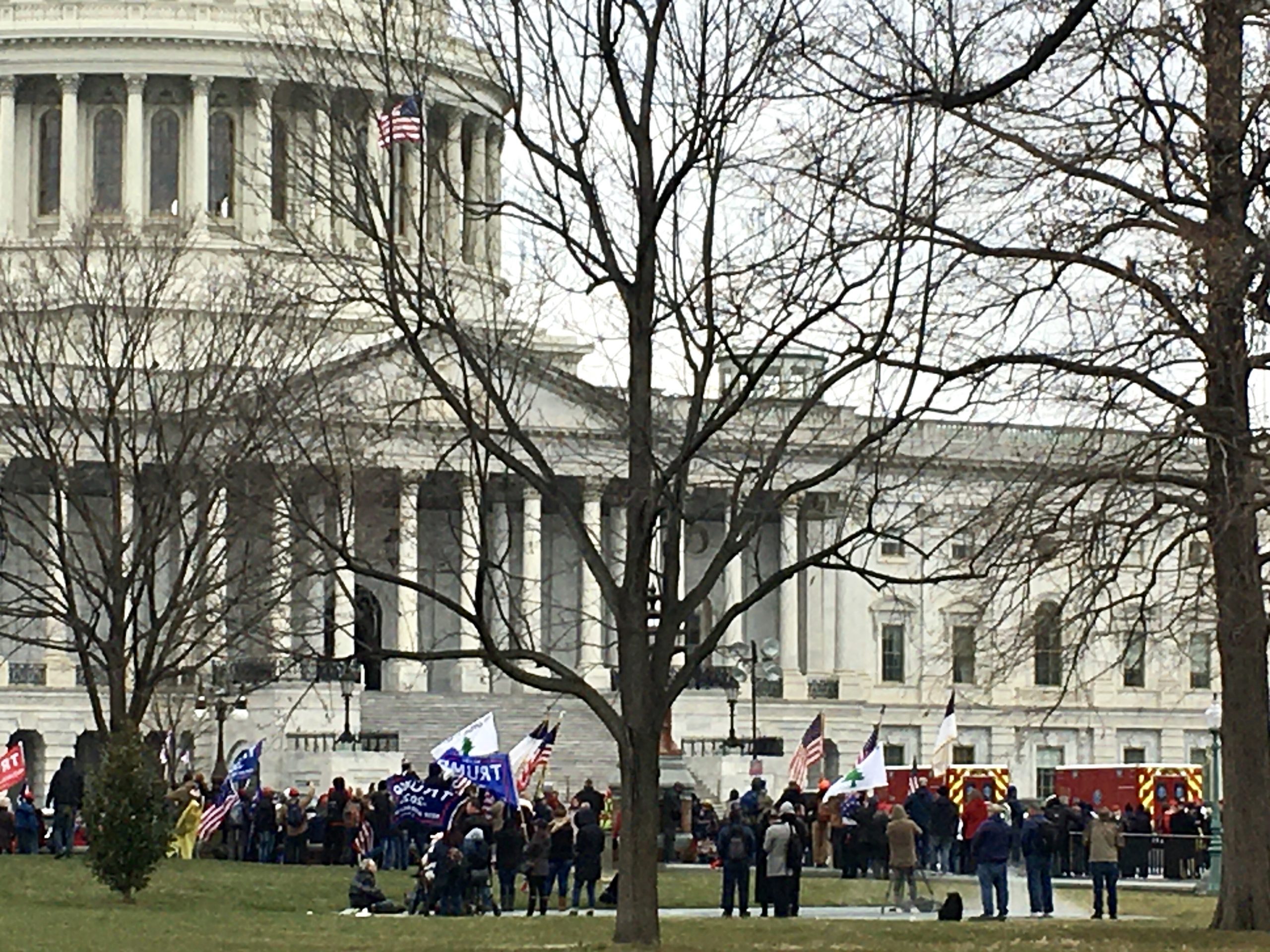 Thousands upon thousands of President Trump’s supporters have been converging upon Washington, D.C., today for the Save America Rally. The purpose of the Trump rally was to pray for our nation and protest the massive voter fraud reported by whistleblowers around the country. Even that bastion of leftist propaganda, CNN, is calling it a “sizable crowd” as people continue to our into the area around the White House and the Washington Monument.

The streets of our Nation’s Capitol are lined with people carrying Trump flags, USA flags and Gadsden “Don’t Tread on Me” flags. Vendors have their wares laid out on many streets throughout Washington, D.C.

Driving around and stopping to talk to people at several different places waiting for the speeches to begin, it is evident this is a peaceful gathering of President Trump’s supporters. People are polite, upbeat, and happy to talk. “We believe that President Trump stands for traditional values and the constitution,” one man told me who preferred not to be identified. “He stands for what our Founding Fathers stood for,” the woman next to him stated.

The big event today is the President’s speech, but President Trump isn’t the only speaker of note at the event. The Save America Rally speakers list includes:

Towards the end of the President’s speech, people began to show up at the Capitol building to await the outcome from the electoral vote. Long lines formed at the porta-potties and small crowds were standing around as Trump’s supporters enjoyed a break in the activities while waiting for his speech to end. Others were heading off for lunch. Keep reading for more updates.

Our man on the street, Mark C., says that after I left, millions of people marched to the Capitol while a line of police vans raced to the building. Some of the protesters stormed the Capitol, got through the security barriers, and broke through the door into the Capitol around 2:00 pm. The Capitol is now on lockdown as Trump supporters give voice to their frustration that their votes were not counted, and Congress will not address their grievances. On top of that, the mainstream media, which is almost entirely controlled by five huge liberal conglomerates, is fueling the fire by dismissing their cause as a “fantasy.” The gathering has quickly moved from peaceful to tense as the electoral congress votes are being debated. More to follow.

“All hell has broken out at the Capitol,” reports Catherine Maulden Tanner. “We came back to the hotel for lunch and protesters have breached the Capitol!!!! The mayor has declared a 6:00 pm curfew. So many police cars, ambulances, fire trucks and paddy wagons are zooming past our hotel!”

Pastor Doug Tjaden posted his first-hand experience at the rally on Facebook. Here is part of his post:

It is surreal to hear CNN talk about President Trump feeding his followers lies when CNN and most of the mainstream media have been consistently feeding the American people lies that their liberal-conglomerate-owners tell them to feed the masses, From what I am hearing, this has fueled the anger of President Trump’s supporters almost as much as the fraudulent election and the heavy-handed censorship of conservative voices by social media. Protesters feel like their rights–including their right to a fair vote– are being taken away.

Now CNN is partnering with the other mainstream media to paint a distorted version of today’s events. Not only are they describing the breach of the Capitol grounds in the most sensationalist of terms, they are also saying President Trump did nothing to stop it, although he has certainly Tweeted to his followers during the first hour of the Capitol breach.

There are reports someone was injured and that police are beating protesters who made it inside the Capitol. President Trump has Tweeted out his wishes for this to be resolved peacefully. Christian Activities calls upon the protesters, Capitol Police and other law enforcement to resolve this peacefully. More updates on the way as I am heading back into D.C..

Washington D.C. has a curfew that started at 6pm, as does Arlington County and the city of Alexandria, VA. Curfew alerts appeared on the phones of people in those areas. Trump supporters were out in full force after the curfew, but police continued to push the crowds back away from the Capitol, and the throng dwindled as the evening wore on.

Unfortunately, in the earlier confrontation at the Capitol, one woman was tragically shot by the police, and she has been declared dead. Ashli Babbit, a 14-year veteran of the Air Force who served four tours, was shot and killed by police inside the Capitol, according to KUSI News.

Reports have been sent to me by two different people that allege that busloads of Antifa and BLM may have entered D.C. last night with the intention of infiltrating the MAGA protesters and causing violence.

Numerous streets in DC have been shut down due to the violence, and the flashing lights of police cars are seen on many corners. Trying to drive out of D.C. right before curfew was a nightmare.

Stay tuned as we continue our coverage of the Trump rally and the aftermath of the attack on the Capitol.

2 thoughts on “Violence Breaks Out at Save America Rally in Washington, D.C., Jan 6”