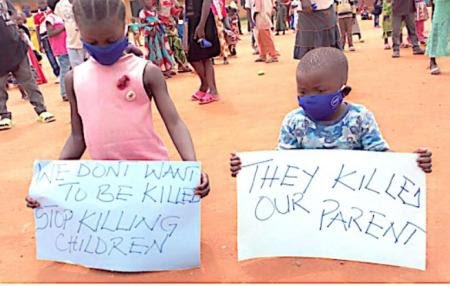 Nigeria and the world have been inspired by Leah Sharibu’s heroic show of faith over fear. The African nation remains a hotbed of escalating genocide against Christians as reports have shown the situation in Nigeria has been rapidly deteriorating for years. The kidnappings and imprisonment of Christian school girls is another way Islamists persecute Christians in Nigera.

Who Is Prisoner of Conscience Leah Sharibu?

Taken from her school with 110 other students in February 2018, Leah Sharibu alone was kept when the other 104 surviving captives were released. She was kept, said her peers and captors, for refusing to renounce her faith in Jesus. She was just 14.

Her classmates said when gun-toting terrorists demanded to know “who here is Christian?” Leah’s arm would shoot up even as her classmates tried to pull it down. Leah is a courageous Christian teenager stolen from her family by radical Islamic ISWAP extremists, a terrorist group affiliated with ISIS. The terrorists have said they intend to keep her as a ‘slave for life’ which they claim their Sharia-based law allows.

Today, Leah, like so many thousands of other Nigerian women and girls, languishes in captivity. She is 19 now and rumored to have been married off to an ISWAP commander and is mother to two children. Those who could rescue her, have not. Promises were made to the family by various members of the Nigerian government. None have been kept.

Join the IRF Summit 2022 for an important conversation with Dr. Gloria Puldu, president of the Leah Foundation, and others who advocate for her return.

Leah is the innocent face of those who have been caught up over several decades of religious-based-violence that has seen over 70 thousand Nigerians slaughtered, pushed upwards of three million Christian farmers from their lands, burned down over ten thousand churches, and which threatens the stability of Africa’s most populous nation. Christian women and girls are among the most vulnerable and targeted population for Nigerian terrorists be they, ISWAP, Boko Haram, Fulani Herdsmen Militias, Al-Qaeda associated groups, or so-called ‘Bandits.’ These women and girls are held as sex slaves and forced against their will to renounce their faith in Jesus.

Millions of Christians Dead or Displaced by Muslim Extremists

Entire Christian communities have been overtaken and are inhabited by Muslim extremists. Millions are internally displaced and suffering without state-funded assistance. Very few perpetrators have been arrested or prosecuted. Strong evidence of complicit government agencies and security officials continue to mount.

Meanwhile, routine attacks on Christian communities—both farming villages and church congregations—continue unabated and are spreading to formerly peaceful regions. They are falsely described by lobbyists for the Nigerian government as clashes between farmers and herdsmen driven by climate change. The true religious nature of the ongoing violence is an inconvenient truth the international community refuses to recognize and address.

Adding insult, U.S. Secretary of State Antony Blinken removed Nigeria from the list of ‘countries of particular concern’ (CPCs) in December 2021, immediately prior to visiting the country in a move widely seen by human rights activists as purely political. Blinken offered no viable explanation for this sudden reversal. Meanwhile reporting by independent journalists on violence against Christians is suppressed by the Nigerian government with threats, intimidation, censorship, and detainments. The Nigerian government rarely acknowledges these attacks and often unjustly and without proof places blame on its victims.

What more can be done to elevate the story of Leah and draw international attention to the religious-based violence, church attacks, and rampant kidnappings plaguing Nigeria? Re-designating Nigeria as a U.S. CPC to hold her accountable for ending religious-based crimes against humanity is a good place to start.