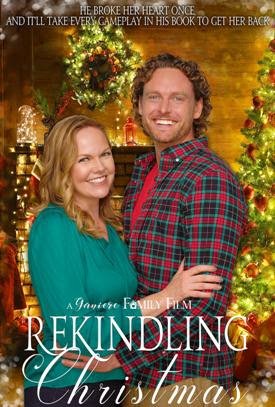 The film which was released last week is being heavily promoted by Dish Network and promises to be a holiday classic based on the novel with the same name, Rekindling Christmas. The film promises the viewer to experience a variety of emotions, betrayal, forgiveness, love, joy and multiple situations that people deal with on a daily basis.

The story centers on a single mom Annika Marshall who, having her high school sweetheart and the love of her life walk out on her for a career in the NFL. Annika marries then gets divorced and now her and her son are trying to cope with the holidays. Only to have everything become more complicated when her first love, Jesse Winchester returns to his hometown as a football super star. After seeing Annika, Jesse soon realizes he made a serious mistake and that Annika was and is the love of his life, but quickly comes to the reality that winning her and her son will take a miracle.

James Ganiere directed and produced the film from a screenplay by USA Today bestselling author and award-winning screenwriter Rebekah R. Ganiere based on her romance novel by the same name. Rebekah states, “Seeing my characters, setting, and story come to life has been one of the hardest and most beautiful things I’ve ever been a part of.”

The film brings together a well-known cast of characters including, Ashley Atwood (Poison Rose with John Travolta and Morgan Freeman) as Annika Marshall alongside Jesse Winchester played by Michael Patrick Lane (CW’s Dynasty) and Raini Rodriguez (Disney star from Austin & Ally and Paul Blart Mall Cop films) as Carrie. Rounding out the cast are veteran actors Thomas Hobson (Nickelodeon’s The Fresh Beat Band), Stella Grubb (Netflix’s Christmas on the Square), Sal Velez Jr. (The Way Back with Ben Afflack, Netflix’s Black Summer and Netflix’s On the Verge) and veteran child star Christian Ganiere as TJ Marshal is most recently seen on his reoccurring role on ABC’s Grey’s Anatomy as autistic Gus Carter.

Christian Ganiere who is a role model for Christian youth shares, “I loved playing TJ. He was such a funny and great character. Getting to work with so many talented and amazing actors was also a lot of fun.”

According the Executive Producer and Director James Ganiere, who is the father of Christian Ganiere, “I believe that Rekindling Christmas is a movie that people from all kinds of backgrounds and all walks of life can relate to.” I wanted to create a film where the family would sit down together watch the movie and enjoy the experience. Families would place it in their video libraries and every holiday season it would be a tradition to watch Rekindling Christmas. What makes this film unique is that it is a faith based family friendly film, written, produced and directed by a family for families.

James Ganiere is an executive producer in the Producers Guild of America, a Television Executive at the TV Academy and a judge for the Emmys. He heads several entities, Rio Vista Universal, a film and television development, production and distribution company based in Hollywood, CA. since 2014.

People can watch the trailer for Rekindling Christmas at:
https://vimeo.com/ondemand/rekindlingchristmas and then proceed to buy or rent the movie.

For information about Rio Vista Universal Films and the upcoming releases go to: www.riovistauniversal.com