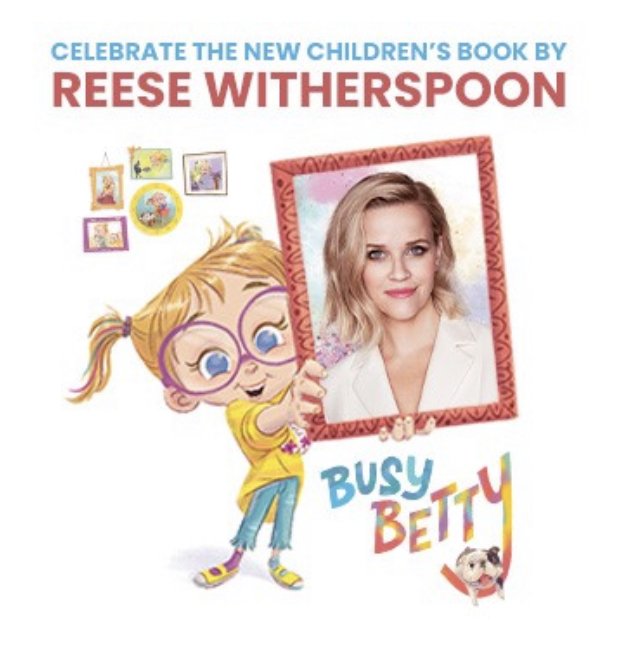 Reese Witherspoon will appear at TPAC in Nashville to celebrate the release of her first kids book, BUSY BETTY!

With BUSY BETTY, the Academy Award-winning actress, producer, and entrepreneur introduces you to Betty – a smart and larger-than-life character who encourages young readers to celebrate what makes them unique and realize that anything is possible. During this special event, Reese will share memories from her childhood, the real-life inspiration behind Betty, and how every kid’s creativity and imagination can be encouraged.

“Since the moment I had a daughter of my own, I have been searching for characters whose self-expression is front and center and holistically portrays the experience of being a young girl,” said Reese. “BUSY BETTY was born out of my own upbringing. I was always singing, dancing, and exploring. I hope Betty’s curiosity, enthusiasm and sense of adventure teaches our girls that not only can they do anything they set their minds to, but also by applying creativity, focus and teamwork to their ideas, anything is possible.”

Reese Witherspoon will be joined by a special guest for this 45-minute conversation that will inspire and delight readers of all ages. Each ticket to this event includes a copy of BUSY BETTY (published by Flamingo Books, a $19.99 value).

Who Is Reese Witherspoon?

Nashville native Reese Witherspoon is an award-winning actress, producer, founder and New York Times bestselling author. She won an Academy Award® for her portrayal of June Carter Cash in Walk the Line and was later nominated in that same category for Wild in 2014, which she also produced. Witherspoon also starred in beloved films Sweet Home Alabama, Legally Blonde and Election, as well as award-winning television series’ “Big Little Lies,” “Little Fires Everywhere,” and “The Morning Show.” In addition to her acting and producer roles, Witherspoon is an author and founder. In 2018, Reese released her first book, “Whiskey in a Teacup” which was an instant best seller. In 2016, she established the media brand, Hello Sunshine. Hello Sunshine puts women at the center of every story it creates, celebrates and discovers.