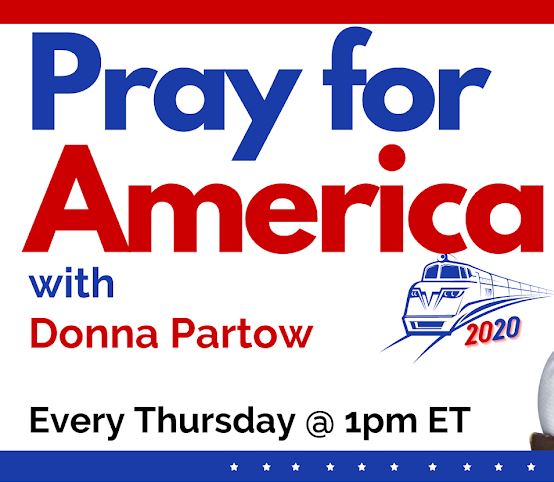 In October, Facebook members of the popular “Pray for Our President” group led by author and speaker Donna Partow, which had over 135,000- 140,000 followers, noticed the group was no longer listed in their Groups list. Mysteriously, while smaller groups of the same name remained, the large group had vanished. The prayer group was apparently deleted by the powers that be at the multi-billion dollar Facebook corporation, during the last critical month before the election.

Group members began posting the news, prompting others to search for the group. While many groups show up on Facebook called “Pray for Our President,” the large group was gone.

A Google search for “why was the group ‘pray for our president’ deleted” brought up two old links to the group as well as a link to the group founder, Donna Partow.

However, when the Google links to the former “Pray for Our President” group were clicked, the following two error messages came up:

A visit to Partow’s personal Facebook page shares a post dated Oct. 14 that “Pray for our President” page was shut down 15 minutes before her interview with Madison Cawthorn, who is running for Congress in North Carolina, was supposed to air live on the group.

Partow had already launched the Trump Prayer Train website after the “Pray for Our President” group on Facebook was shut down in July, stating:

“On July 28, 2020, the Pray for Our President Facebook Group (which I have led since November 2016) was deleted without warning and without explanation. I fought to have it restored and won. But let’s not take any chances. Please enter your email address so that if this happens again, we can rebuild on another social media platform.”

Apparently lightning struck twice as the “Pray for Our President” Facebook group has disappeared again, but the Trump Prayer Train website remains for those who want to join Partow and others in prayer for President Trump.

A member of the deleted “Pray for Our President” group, Todd Engle states, “What I liked about this group was that allowed believers…in huge numbers to be connected in real time…and to be able to agree in prayer…in real time….thousands at at time. We live in a time of being so “disconnected” from people in real life…and that was true even before COVID. We need better Christian platforms to be able to do this.”

On the other hand, users from the left point to Facebook’s “community standards” as justification for the group’s deletion, ignoring the fact that groups that spew hate about conservative leaders, police, and Supreme Court nominees are allowed to say pretty much whatever they want in spite of “community standards,” while conservative groups are shut down under mysterious circumstances.

Facebook and other liberal-owned social media and tech platforms including Twitter and Google, have come under immense fire recently for their heavy-handed and biased censoring, blocking, deleting and banning of conservative voices and news. See: Worst Week Ever for Social Media Suppression of Information

Partow had not been reached for comment at the time this article was published, but we will keep you posted if we learn more.