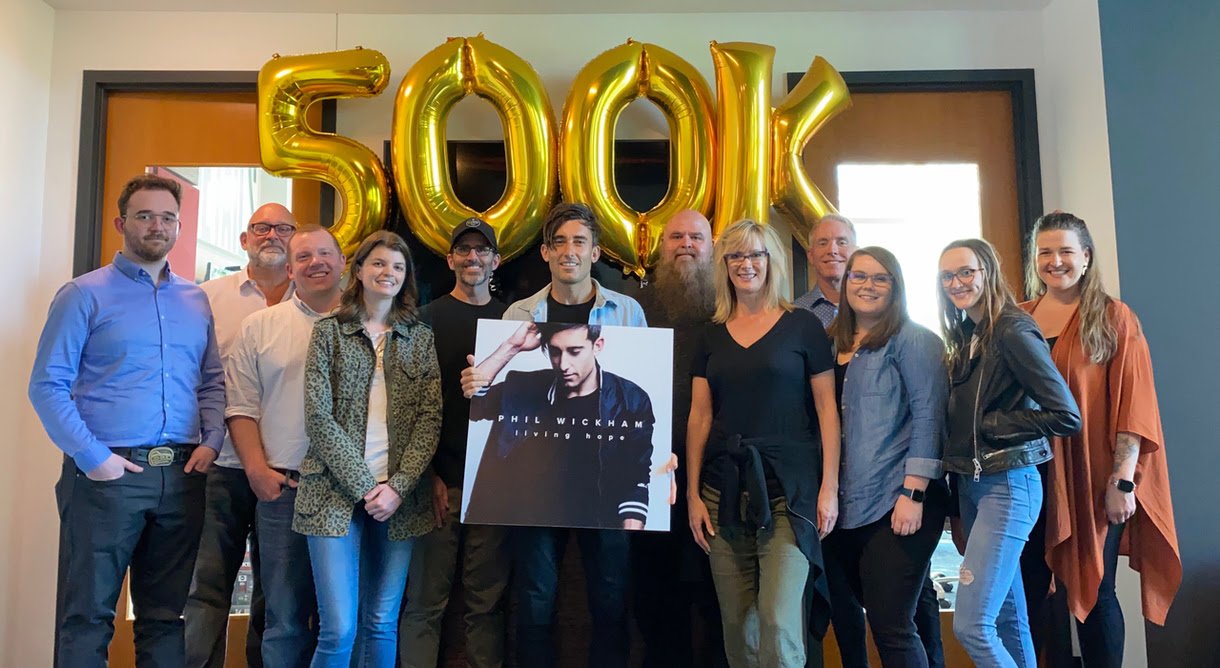 One of the biggest songs of Phil Wickham‘s career,  “Living Hope” was recently certified Gold by the RIAA.   Since it’s release in 2018,  the 2019 GMA Worship Song of the Year recipient was a Top 10 radio hit and has been a staple in churches across the world, currently No. 7 on the CCLI chart. FairTrade Services recently celebrated with Wickham in Nashville, with President Jeff Mosley remarking, “It is always an honor to partner with great artists who produce great art. Phil fits that bill and adds a layer of impact that has a broad reach. We wholeheartedly congratulate Phil on this recognition of the impact he and this song have had.”

“Living Hope may be my favorite song I’ve ever written,” Wickham commented.  “I still get excited to sing it in a set. What an honor it is to write and sing song about Jesus that others around the world have made their own. Incredible to see it become a certified Gold song.”Wickham’s latest new single “Battle Belongs,” is available now, and like “Living Hope,” was co-written with Bethel Music’s Brian Johnson. The track is a powerful proclamation that in Jesus we stand on the side of a battle that has already been won.

Who Is Phil Wickham?

Phil Wickham is, at his core, a humble and sincere artist who writes songs and worships God using the medium of music. It is with that brush that he paints images of a loving and creative God across the canvases of listeners’ hearts and minds. The evidence of this gift has been apparent on all of his critically acclaimed efforts: Phil Wickham (2006), Cannons (2007), Heaven & Earth (2009), Response (2011), The Ascension (2013), Children Of God (2016), and Living Hope (2018). His RIAA platinum certified single “This Is Amazing Grace” gave Wickham his first career No. 1, holding the top spot on Billboard’s National Christian Audience Chart for 13 consecutive weeks. The honors continued as the single was named Billboard’s 2014 No. 1 Christian Airplay Song of the Year and BMI’s 2015 Christian Song of the Year. In 2020, the recipient of the Gospel Music Association’s Dove Award for Song of the Year, “Living Hope,” was certified Gold by the RIAA. In addition to its success at radio, the song has become a beloved anthem in the modern church, increasing Wickham’s recognition as a gifted artist and songwriter with a true heart of worship. Living Hope along with Living Hope (The House Sessions) are available now.