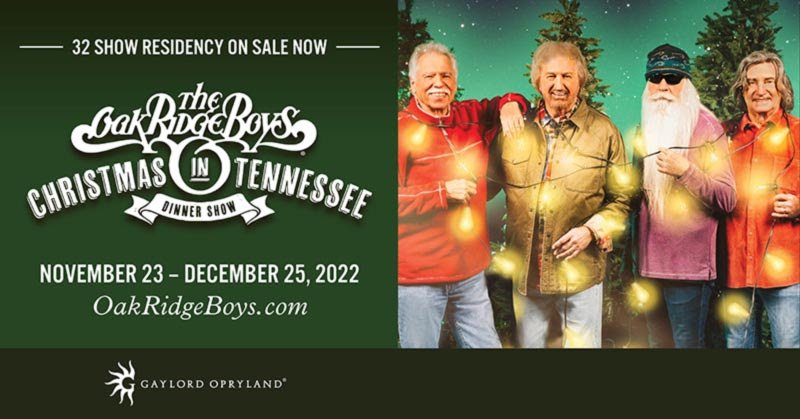 GRAMMY® Award-winning and Country Music Hall of Fame members, The Oak Ridge Boys, will return to the Gaylord Opryland Resort to celebrate the holiday season at home this year with a 32-show residency as part of the resort’s 39th annual ‘A Country Christmas’ event. The Oaks’ ‘Christmas in Tennessee’ Dinner Show, November 23 – December 25, 2022, features a delicious holiday meal prepared by the resort’s culinary team followed by the Oaks and their band performing Christmas classics, new favorites, and many of the timeless hits that have shaped their legendary career. For more information on ‘Christmas in Tennessee’, visit OakRidgeBoys.com.

“It is such an honor to be bringing our Christmas show back to Gaylord Opryland in 2022 for the THIRD year in a row,” shares Joe Bonsall. “Nobody does Christmas like Gaylord Opryland, and our dinner shows have become a part of the tradition over the last few years! We can promise this, our show will be much different than last year, but Santa will still be a part, as will our big state-of-the-art production. And we will give each audience a strong set list of songs covering every aspect of Christmas. We hope you will plan to join The Oak Ridge Boys over the holidays this year for a gourmet dinner and a show that has been honed over decades of Christmas tours.”

Along with classic Christmas tunes, the Oaks will also perform some of their biggest hits from more than 40 albums including eight of their Christmas albums. The band will also take a look back on Christmas past, celebrate the birth of Christ, and create amazing holiday memories for guests in the festive surroundings of Gaylord Opryland Resort.

Who Are The Oak Ridge Boys?

The Oak Ridge Boys have sold over 41 million units worldwide and are synonymous with “America, apple pie, baseball, and country music.” In addition to their awards and accolades in the country music field, the Oaks have garnered five GRAMMY® Awards, nine GMA DOVE Awards, and two American Music Awards. The group—Joe Bonsall, Duane Allen, William Lee Golden, and Richard Sterban, members of the prestigious Country Music Hall of Fame (2015 Inductees) and the Grand Ole Opry (since 2011)—is known worldwide as one of recording history’s most extraordinary musical successes. They have charted single after single and album after album, celebrating two double-platinum albums and more than 30 Top 10 hits, including No. 1 chart-toppers “Elvira,” “Bobbie Sue,” “Thank God For Kids,” “American Made,” and “Y’All Come Back Saloon,” among dozens more. They recently were part of the Rock of Ages TV special and DVD with Gaither Music Group.