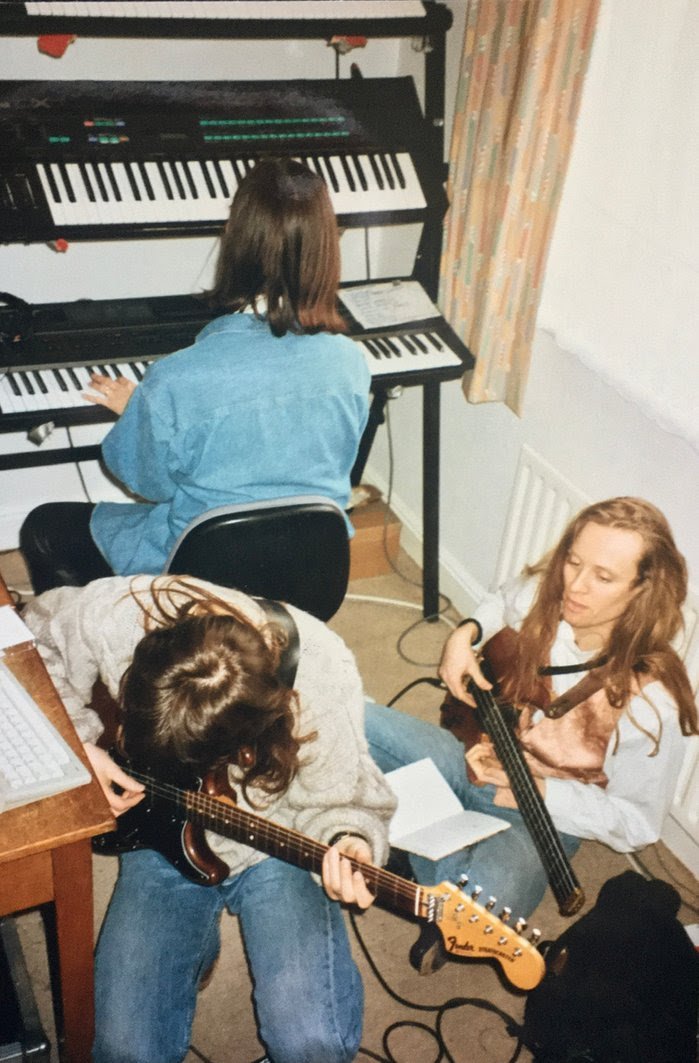 Dave Bainbridge announces a new Book of Iona video that features a recording of Iona’s ‘White Sands’ that Nick Beggs and Bainbridge collaborated on (virtually!) last month. The video was produced exclusively for cd 17 of the Iona box set “The Sound of Iona.” Bainbridge shares, “Nick’s Chapman Stick playing on this new version is beautiful.”

Bainbridge is continuing work on The Book of Iona box set (release date 20th June) and has made several interesting discoveries in his tape archive. “I found the original digital (DAT) tapes with the raw vocal loops that we recorded with Clannad vocalist Moya Brennan for the ‘Journey into the Morn’ album, back in 1995! I also found the original DAT tapes of Robert Fripp’s Frippertronics synth guitar loops we recorded for the ‘Beyond These Shores’ and ‘Journey into the Morn’ albums.”

He decided it would be a great idea to use some of these as the basis for some new music and ads, “I’ve just completed a new 9-minute long piece for the box set, titled ‘In Everything,’ which features Moya Brennan, Robert Fripp, myself on guitar and keys and my good friend from Iona days Terl Bryant on percussion!”

Another new recording that will feature on the box set is of a previously unreleased instrumental track called ‘Dun I‘ which Bainbridge wrote in 1990 for possible inclusion on ‘The Book of Kells‘ album. He also recently came across a later 1990 demo recorded with David Fitzgerald playing tin whistle. “Whilst that demo will be on the box set, there will also be a newly recorded version, again featuring David, who is recording his whistle from home, and wonderful Celtic harpist Julie Darling, who is also recording her harp part at home (the original demo had a synth harp part).”

ALL DATES SUBJECT TO WHAT HAPPENS WITH THE CORONAVIRUS RESTRICTIONS

The new Open Sky Records Store offers a few download versions of Bainbridge and Iona albums with more still to be added, as well as some Iona 30 merchandise. “We’ll also be adding more merch items in the coming weeks. We continue to be amazed at the level of box set pre-orders so far – thank you so much for your support in these uncertain times.”

The Open Sky Records store can be found at musicglue.com/iona and includes new music from Iona, Dave Bainbridge and Nick Beggs.

Iona was a progressive Celtic rock band from the United Kingdom. The group was formed in the late 1980s by lead vocalist Joanne Hogg and multi-instrumentalists David Fitzgerald and Dave Bainbridge. The group was laterjoined by Troy Donockley who played the uilleann pipes, low whistles, and other instruments. The band announced on Facebook that they were disbanding on Dec. 11, 2016.

Archive photo above of Jo Hogg, Nick Beggs and Dave Bainbridge in 1993, working on songs for the ‘Beyond These Shores‘ album.