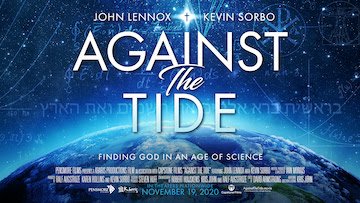 New Trailer Launched for Documentary with Kevin Sorbo Exploring ‘Against the Tide: Finding God in an Age of Science’

“Against the Tide: Finding God in an Age of Science” with Kevin Sorbo is coming to the big screen for an exclusive one-night nationwide theatrical event on November 19. Today, as ticketing launches across the country, the team at Pensmore Films is also unveiling a compelling new trailer, which can be viewed at https://againstthetide.movie/watch-trailer/.

Presented by Pensmore Films and Fathom Events, this compelling documentary follows University of Oxford mathematician and philosopher Professor John Lennox and veteran Hollywood actor and director Kevin Sorbo (Hercules, GOD’S NOT DEAD,Supergirl) as they explore the powerful evidence of the harmony between science and Christianity.

Kevin Sorbo ‘Against the Tide’

AGAINST THE TIDE takes viewers on a journey, following acclaimed University of Oxford mathematician, author, and philosopher Dr. John Lennox and veteran Hollywood actor, director, and producer Kevin Sorbo (Hercules, GOD’s NOT DEAD, Supergirl). The dynamic duo travel from Oxford to Cambridge to Israel, experiencing firsthand many of the sites and facts that are essential to understanding the complementary relationship between science and faith.

The documentary shares Lennox’s life-long passion to present evidence that science and history not only align with scripture, but actively support the biblical narrative. An internationally renowned speaker and author on the interface of science, philosophy, and religion, Lennox breaks down the arguments and issues most often cited in apologetics debates, reflecting on the several very public, sold-out encounters he has had with well-known atheists Richard Dawkins, Christopher Hitchens, Peter Singer, and Michael Shermer, among others. Sorbo probes Lennox on the issues and finds not only captivating answers, but deeper questions as well.

“It was an honor to spend significant quality time with Prof. Lennox while working on AGAINST THE TIDE. That alone was an opportunity that I couldn’t refuse,” shares actor Kevin Sorbo. “This film is a master-class in understanding and combating the atheist manifesto. I know it will be a thought-provoking asset to anyone who seeks to have a deeper understanding of both the wonder of scripture and the need for Christians to be able to defend what they believe.”

An internationally renowned speaker and author on the interface of science, philosophy, and religion, Lennox has dedicated his life to standing up against the rising tide of atheism by sharing the rational foundations of his belief.  The film acts as biography and travelogue, sharing what has inspired and fueled this passion to present compelling evidence that science and history not only align with scripture, but actively support the biblical narrative.

“Now, more than ever, there are many powerful voices portraying science and Christianity as fundamentally incompatible,” states Executive Producer Steven Huff. “Dr. Lennox is one of today’s leading academic voices dispelling this false choice and standing strong against the tide of misinformation and confusion.”

Created by Pensmore Films and Kharis Productions, and distributed by Fathom Events, AGAINST THE TIDE will be a resource for homeschool groups, churches, Christian schools, and science and apologetics-loving people of faith for decades to come.

For more information on “Against the Tide: Finding God in an Age of Science” with Kevin Sorbo, purchase tickets, or to register for movie updates, please visit http://againstthetide.movie.

5 thoughts on “New Documentary with Kevin Sorbo ‘Against the Tide’”