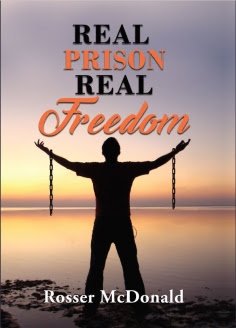 Inmate Rickie Smith was considered the most violent prisoner in the Texas prison system. That was before a radical encounter with the Gospel of Jesus Christ transformed his heart, his habits and his life. “Real Prison Real Freedom” by Rosser McDonald shares Smith’s sobering story from the time of his birth to the present day.

The 83-year-old author first met Smith 30 years ago while filming his award-winning documentary about prison ministry. “When I first met Rickie, God had gotten hold of his heart, and he was so very different from the younger, viciously violent former member of the white supremacist Aryan Brotherhood about whom I learned when investigating his backstory,” said award-winning reporter Rosser McDonald.

“As a man of faith, I am continually humbled and encouraged by Rickie’s radical journey, which is an unshakable testimony of the redeeming nature of a real relationship with God.”

Infidelity and domestic violence were modeled to Smith by his adoptive parents while growing up, and he began getting into physical fights at a young age. After years of being rejected by his adopted father, bullied at school and always falling behind in academics, Smith found a false sense of belonging through crime and the wrong crowds.

At age 14, he was jailed for the first time, not knowing that prison would become his eventual home. A few years later, after being sentenced to 10 years in 1983 for criminal mischief and possession of a controlled substance, he had three 99-year terms added for attempted murder while in prison. The book recounts his multiple violent attacks on both guards and fellow inmates — his attempts to show others in the prison system that they needed to respect him.

“His whole life, Rickie was told that he was ‘not good enough’ by his father who beat him, his teachers who didn’t invest in him and his schoolmates who mocked him for being adopted,” said Rosser. “When he was a boy, his parents started going to church, and Rickie was hopeful that they would change. But when things simply got worse, Rickie’s heart hardened to God.”

Smith would be passed around from prison to prison due to his unruly violence. He rejected any kind of correction, legal or spiritual, but became more burdened and depressed as his murderous plans kept failing. Finally, because of the faithful letters of one Christian man who continually sent Scripture-filled notes to Smith, the word “rest” took hold in his mind and he sought solace in the Bible. Touched by the Gospel message, Smith finally turned his life around and has worked to grow in his faith and change his reputation ever since.

“Rickie’s story is an important one for every one,” said McDonald. “It’s a beautiful and moving reminder that there is no evil in this world stronger than the love of God. The life of Rickie Smith is a powerful testimony for any individual fascinated by stories of radical transformation and happy endings that didn’t seem possible.”

Though Smith remains in the Alfred Hughes Unit in Gatesville, Texas, serving out his three 99-year sentences, McDonald felt his story needed to be shared and wrote “Real Prison Real Freedom,” with the title inspired by Smith’s statement upon returning to his cell after being baptized in the prison’s chapel: “I have chains on my body but there are none on my heart. Real freedom in the middle of real prison!” The book releases May 19. For more information, visit  https://alarryross.com/real-prison-real-freedom.

Oklahoma native Rosser McDonald met his wife, Glenda, who is from Seminole, as a freshman at Oklahoma Baptist University. Shortly after getting married, he left his career as a seismographer in his hometown of Shawnee, OK, in 1965 to pursue a job in radio. This career change would propel him into unprecedented success. He then worked as a news reporter in Oklahoma before being recruited to Dallas to work as a state government and political news reporter.

It was in Dallas where McDonald developed his craft for in-depth coverage and began making documentaries. His award-winning documentary “Set Free” covering Texas prison systems hosted by Tom Landry allowed him to meet and form friendships with multiple hardened inmates, including Rickie Smith, who would become the subject of his debut book, “Real Prison Real Freedom.”

Today, Rosser McDonald is retired from the news and radio industry but continues to correspond with his friends in prison and works with Christian filmmakers in his spare time. His new book ‘Real Prison Real Freedom’ is due out on May 19, 2020.