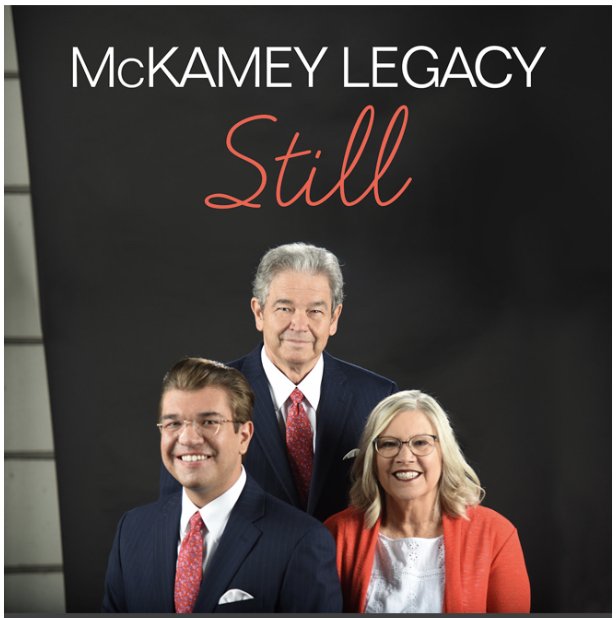 For fans who had resigned themselves to the end of an era with the retirement of Southern Gospel legends, The McKameys, 2022 opens with some joyful news: a new generation of the family have not only picked up the banner, but today announce their signing to Horizon Records and the first single from their group, McKamey Legacy: “Still.”

Composed of Ruben and Peg McKamey’s daughter, Connie Fortner, her husband, Roger, and their son, Elijah, McKamey Legacy’s members were already integral contributors to the McKameys sound — and “Still” draws the connection even more tightly. Written by Connie’s sister, Sheryl Farris, who also sang with the McKameys — and whose name appears on many of their biggest hits — its gently rolling rhythms and melodic curves underline the lyric’s message of comfort:

“Still God’s mercy and love never cease
Still He offers me unending perfect peace
I will trust in Him alone
My hope and where my help comes from
Still He’s a refuge and strength in troubled days
Still though the Earth moves I will not be afraid
He will not fail, He will not fall
He is King over all
Still”

“We are excited to be carrying on the relationship with Horizon Records that our family, The McKameys, started nearly 30 years ago, and we are very excited to be releasing our first single,” McKamey Legacy said in a statement.

“Horizon Records is excited to be working with McKamey Legacy,” adds Horizon Records A&R Director, Greg Bentley. “The McKameys signed with Horizon Records around 1993 and have had a long and successful relationship with the label. When Roger, Connie and Eli decided to carry on the‘Legacy,’ we knew it was a no-brainer to continue releasing great music from them on the Horizon Records label. The fans have already embraced them as they move into this new era of McKamey Legacy.”

Who Is McKamey Legacy?

McKamey Legacy is a family trio from Clinton, Tennessee that came to be after 39 years of full-time touring with the rest of their family, The McKameys. After that group retired in 2019, and after much prayer, group members Connie Fortner (Ruben and Peg’s daughter), her husband, Roger Fortner and their son, Elijah Fortner felt the call from God to continue the legacy of their family and they began traveling and singing again in 2021 as McKamey Legacy. The group will be touring on a part-time basis, performing songs that were loved and most requested from their McKamey days as well as some new songs that fit their message. Sharing the Gospel in song to a lost world and sharing the message of hope to discouraged Christians is their goal, following God in everything that they do and bringing Glory to God in all things done by them