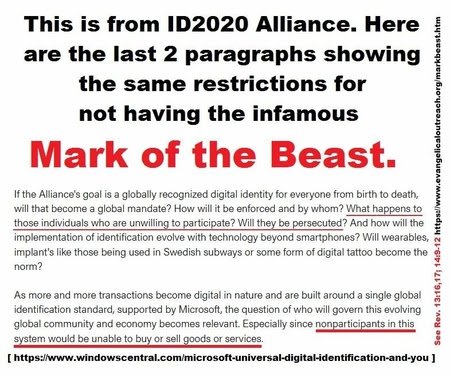 The following information about the Mark of the Beast Penalty is submitted by Dan Corner of Evangelical Outreach:

Have you heard of the ID2020 Alliance? More importantly, do you know what it says? Among other things, besides a universal digital identification for all, it states the following from the last paragraph:

Mark of the Beast Penalty

“As more and more transactions become digital in nature and are built around a single global identification standard, supported by Microsoft, the question of who will govern this evolving global community and economy becomes relevant. Especially since nonparticipants in this system would be unable to buy or sell goods or services.”
[https://www.windowscentral.com/microsoft-universal-digital-identification-and-you]

Please verify that for yourself and note the similarity to the biblical mark of the beast, which is most alarming:

“He also forced everyone, small and great, rich and poor, free and slave, to receive a mark on his right hand or on his forehead, so that NO ONE COULD BUY OR SELL UNLESS HE HAD THE MARK, which is the name of the beast or the number of his name. This calls for wisdom. If anyone has insight, let him calculate the number of the beast, for it is man’s number. His number is 666.” (Rev 13:16-18)

The seriousness of the “saints” receiving that mark on their body to buy or sell is explicitly revealed here, which also counters both of the biggest religious myths of our day: the Pre Trib Rapture and Eternal Security (Once Saved Always Saved).

“A third angel followed them and said in a loud voice: ‘If anyone worships the beast and his image and receives his mark on the forehead or on the hand, he, too, will drink of the wine of God’s fury, which has been poured full strength into the cup of his wrath. He will be tormented with burning sulfur in the presence of the holy angels and of the Lamb. And the smoke of their torment rises for ever and ever. There is no rest day or night for those who worship the beast and his image, or for anyone who receives the mark of his name.’ This calls for patient endurance on the part of the saints who obey God’s commandments and remain faithful to Jesus.” (Rev 14:9-12)

The devil, through the antichrist, is trying to get your soul and if he can deceive you into receiving the mark, he will succeed. Our world has radically change since 2020 and is speeding along towards a cashless, digitally-ruled monetary system controlled to such a tight degree, that one’s complete financial transactions will be terminated unless he fully complies with the system. Related to ID2020 is WO2020060606 – CRYPTOCURRENCY SYSTEM USING BODY ACTIVITY DATA! [https://patentscope.wipo.int/search/en/detail.jsf?docId=WO2020060606] Notice the last 6 digits of that patent number.

Coming in due time will be the “war on the saints” (Rev. 13:7) with multitudes of righteous people from around the globe wisely refusing the mark of the beast and remaining faithful to Jesus until the end; these will be martyred and thereafter going to Paradise, their true home (Rev 7:9).

There are only two possibilities for the people who wisely reject the mark of the beast: captivity or decapitation (Rev. 13:10 cf. 20:4). So, how can the righteous victoriously overcome? Here are the details:

“They overcame him by the blood of the Lamb and by the word of their testimony; THEY DID NOT LOVE THEIR LIVES SO MUCH AS TO SHRINK FROM DEATH.” (Rev 12:11)

“DO NOT BE AFRAID OF THOSE WHO KILL THE BODY BUT CANNOT KILL THE SOUL. Rather, be afraid of the One who can destroy both soul and body in hell.” (Mat 10:28)

“But whoever disowns me before men, I WILL DISOWN HIM before my Father in heaven.” (Mat 10:33)

And God from his throne stated:

“He who overcomes will inherit all this, and I will be his God and he will be my son. But the COWARDLY, the unbelieving, the vile, the murderers, the sexually immoral, those who practice magic arts, the idolaters and all liars–their place will be in the fiery lake of burning sulfur. This is the second death.” (Rev 21:7,8)

It takes godly courage to follow Jesus, while the COWARDLY are the first on the list as those who will go to the lake of fire. Spread the word. Pass this timely message on to those you care about.