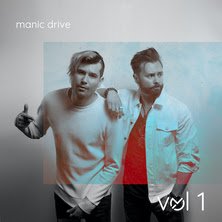 The Juno Award-winning artists Manic Drive, brothers Shawn and Michael Cavallo, are continuing their musical journey with a series of volumes. Their first project, simply titled Vol 1 will release Friday, November 20, 2020, through a new partnership with The Orchard (owned by Sony Music).

After impacting 44 arenas on Winter Jam 2019 and topping multiple Billboard charts throughout recent years, Manic Drive has independently gained over 50 Million plays across streaming platforms. Their recent television and commercial success with NBC Universal, McDonald’s, and top YouTube Channels (including “Dude Perfect” ) has also propelled Manic Drive into new territory as they expand their audience base through new avenues.

Vol 1 will feature 6 new tracks produced by Joël Bruyère (Thousand Foot Krutch), including songs like “High Life” featuring Mr. Talkbox, internationally known for his collaboration with Bruno Mars’ “24K Magic”. The series of songs will take listeners on a journey from explosive high-energy anthems like “Champion,”  to somber, eye-opening moments as portrayed in their leading single “Thank God I’m Alive”.

In addition to the new songs, Manic Drive will be supporting this project with several new music videos set to release throughout the following months. Manic Drive’s latest releases have already received strong online reactions, with their latest single ”Champion” added to mainstream Apple and Spotify Editorial playlists. As of early November, their pre-released singles have already accumulated over 100,000 streams on Spotify alone.

It’s no surprise that the recent events of 2020 have shaped Manic Drive’s expression through music. With losses and gains in their immediate family and shifts in their music career, the dynamics are difficult to ignore. The result is an album full of honesty, merged with the band’s signature edge-pop sound. Manic Drive’s Vol 1 is the first of many volumes to be released in yearly increments and sets the pace of Manic Drive’s musical direction.