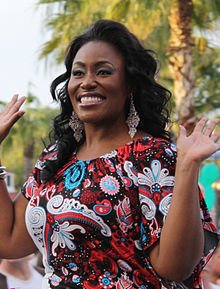 Mandisa “What If We Were Real” Podcast Launches

Grammy-winner Mandisa has just launched her new video podcast, “What if We Were Real.” The new podcast allows Mandisa, along with a panel of her friends and Christian Music artists, to get real while they discuss various topics.

The first podcast can be seen here. https://www.youtube.com/watch?time_continue=6&v=JyPPYbTLYIw&feature=emb_logo. The new podcasts are only a small part of what Mandisa has been up to recently.

On June 3, the former American Idol contestant debuted a new single, “You Keep Hope Alive,” with worship leader and Gotee Recording artist Jon Reddick.  Written by Reddick, “You Keep Hope Alive” is “A declaration to our souls that God is still on His throne, and specializes in bringing beauty from ashes,” says Mandisa.

The songstress is also currently doing an Encountering God study via her Twitter and was hosting a Girls Night Live Tour along with other female singers before the COVID-19 lockdowns.

Mandisa kicked off 2020 with her first single of the year, “Way Maker.” The track was Mandisa’s first release after her chart-topping 2017 album Out of the Dark which featured the radio hits “Unfinished” and “Bleed the Same” (featuring Tobymac and Kirk Franklin).  She also recently joined DJ Maj in hosting some of his Virtual Family Dance Parties in May.

Mandisa Lynn Hundley is a gospel and contemporary Christian recording artist. Her career began as a contestant in the fifth season of American Idol, where she finished in ninth place.

She released her debut album in 2007. She won her first career Dove Award for Pop/Contemporary Album in 2014.

With more than 1.6 million records sold, GRAMMY® winner Mandisa today is a voice of encouragement and truth to people facing life’s challenges all around the world. In less than a year, Mandisa performed her three RIAA Certified Gold hit singles “Overcomer,” “Good Morning (feat. TobyMac)” and “Stronger” on ABC’s Good Morning America (GMA). “Stronger” became an anthem, creating opportunities such as welcoming the emotional return of beloved morning host Robin Roberts and an invitation to perform the national anthem during a Sunday night NFL Network game to kick off Breast Cancer Awareness Month. Her 2013 GRAMMY® award-winning album Overcomer debuted at No. 1 on the Billboard Christian Albums Chart. The album’s title track proved to be a smash at radio and earned the GRAMMY® for Best Contemporary Christian Music Song.

Also a 2-time K-LOVE Fan Awards co-host, Mandisa debuted her latest chart-topping album Out Of The Dark alongside sharing the moving story of her fight with depression for the very first time on GMA as well. The latest 15 track collection includes notables such as the top 5 hits “Unfinished” and “Bleed The Same (featuring TobyMac, Kirk Franklin).” She launched her new video podcast, “What if We Were Real” in June 2020.