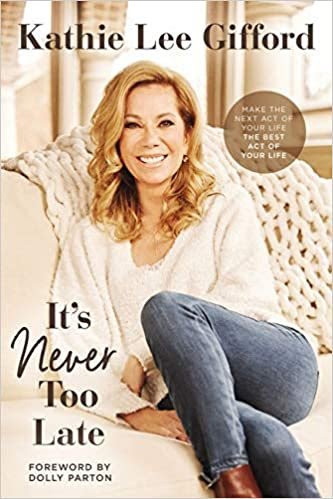 When  beloved TV personality Kathie Lee Gifford stepped down as co-host of the fourth hour of TODAY with Hoda Kotb, many assumed she was winding down her career… but it turns out she’s just getting started! As Kathie Lee steps into what she’s describing as the most creative act of her life—singing, acting, writing, and directing movies—she says, “I’m not retiring; I’m refiring!”

Coming off of the release of her feature-length romantic comedy, “Then Came You,” in September, and  the release of her children’s book, Hello, Little Dreamer (Thomas Nelson) in October, Gifford now announces the release of her newest book, It’s Never Too Late: Make the Next Act of Your Life the Best Act of Your Life, releasing Dec. 1, 2020 (W Publishing Group, and imprint of Thomas Nelson). Part memoir, part lyrics from Gifford’s songs, and part sharing wisdom and motivation from lessons learned, this is a book for women in their thirties and beyond who are embarking upon their own major life changes.

“I’ve always loved Kathie Lee, and I respect and admire her openness,” said legendary musician and cultural icon Dolly Parton, who penned the book’s foreword. “I was fascinated, but not surprised, when she decided to leave a well-established, secure career to start a whole new chapter in her life. It’s always been my belief that you never get too old to dream. I often say (and mean it) that I wake up with a new dream every day . . . well, at least one, usually more. Dreaming is easy. Making them come true is the hard part.”

Gifford divulges little-known details from her own incredible life of building dreams such as her discouraging struggle to succeed in Hollywood (including being snubbed by a top talk show host). She reveals the deep loneliness of her first marriage, her refusal to budge from the truth of her sister’s miraculous healing (which put her in conflict with Tammy Faye Baker), even the words of prayerful comfort she gave to Ethel Kennedy as she viewed the body of her dead son.

She is best known for her 15-year run (1985–2000) on the talk show Live! with Regis and Kathie Lee. For “Live” fans, there’s a chapter celebrating Gifford’s last chance to spend time with her friend and her undying love for her late husband Frank is woven throughout the book. Then there are the hilarious highlights of Kathie Lee’s time at the TODAY Show. For instance, how enjoying wine ingeniously became—and remains—such a hallmark of the show.

Not to be confused with a traditional memoir, the book is as much a look and push forward as it is a look back. It’s in this looking forward that Gifford shares insight and encouragement to everyone who is facing a new life stage—whether marriage or divorce, the empty-nest years, the death of a loved-one, or a professional crisis or career change. Gifford deftly takes readers on a universal search for meaning, empowers them to go after what matters most, and to make every day count.

“Growing older is not for the faint of heart,” says Gifford  “but I truly believe that this next season of my life has the potential to be the best season in a life that, to this point, has been jam-packed with amazing opportunities and great adventures. With time and distance, and hopefully a dash of wisdom along the way, you’re able to see everything that has happened in your life with a new perspective. In your recollections of the past, a pattern emerges, and a distinct path forward eventually becomes visible.”