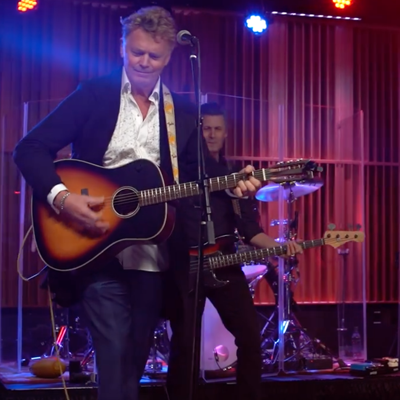 Legendary actor and chart-topping recording artist, John Schneider, and Trick Pony’s Keith Burns, have teamed up for the brand new single, “Trump Card.” The official music video for the tongue-in-cheek nod to the Commander-in-Chief premieres on Schneider’s YouTube channel tonight at 8:00 p.m. CDT, and an exclusive live performance with the Jay Sekulow Band premiered this morning on Jay Sekulow’s Facebook page.

Schneider also appeared on today’s Jay Sekulow Live to talk about being a conservative in Hollywood, The Dukes of Hazzard and much more.” The popular actor has appeared in diverse roles including Bo Duke” on The Dukes of Hazzard, “Jonathan Kent” on Smallville and “Jim Cryer” on his current series, Tyler Perry’s The Haves and the Have Nots (now in Season 7).

When he’s not arguing cases at the Supreme Court of the United States or testifying before Congress, Sekulow can be found behind his drum set or playing guitar with the Jay Sekulow Band. What started as a hobby has turned into a stellar lineup with an all-star cast, featuring former members of Kansas, Petra, DC Talk, and more. Over the past few years, the band has performed with legendary guests such as Ricky Skaggs and Lee Greenwood, and their music videos have been streamed by millions online.

“It’s amazing to me that so much talent and passion can live in one person,” says Schneider. “Jay approaches music with the same excellence he approaches law. What an honor to show this song to the world through Jay’s gifts!”