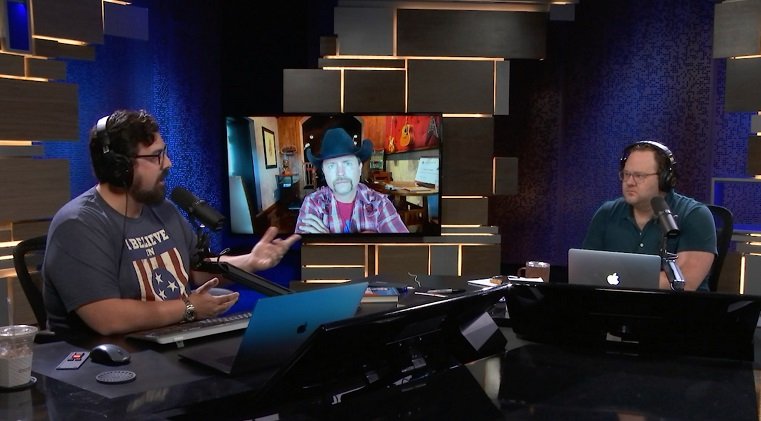 Country Music superstar John Rich made back-to-back appearances on The Logan Sekulow ReProgram this week. He first appeared on Tuesday to share memories and discuss the untimely passing of Country Music icon Joe Diffie. Diffie tragically died due to complications from COVID-19. Rich then returned to the show this morning to premiere the brand new BIG & RICH single, “Stay Home” — inspired by President Trump’s Coronavirus advice and now available everywhere.

Rich wrote the chorus to BIG & RICH’s “Stay Home” and decided to call in some friends to see if they were as amused as he was. “So I called up my buddy Charlie (Pennachio) and my buddy T.J. (McDaniel), and then I called up Larry Gatlin of the Gatlin Brothers whose one of the silliest, craziest guys in the world and I got them all on a conference call… and in about 42 minutes the four of us had finished writing the song ‘Stay Home.’ Called up Kenny and Kenny rolled out of his chair laughing so hard and said, ‘we gotta record this now!’”

Rich connected to The Logan Sekulow ReProgram via video link to premiere the new song and remind everyone that we’re all in this together.

“It’s a terribly serious situation, obviously, but the flip side of it is, you look at just some of the absurdity of what’s going on right now in your house and for how long this is going to be going on,” said Rich. “We gotta have some kind of relief from that.”

During the segment, Rich also discussed his new Fox Nation show, The Pursuit, and his successful whiskey brand, Redneck Riviera, which is now in 10,000 stores nationwide.

“It was an honor to have my friend John Rich Skype in with us on The Logan Sekulow ReProgram,” said Sekulow. “Technology has its benefits and it felt like he was in the room with us. We all need this song right now. It’s offers some great laughs and a message people need to hear!”

About The Logan Sekulow ReProgram