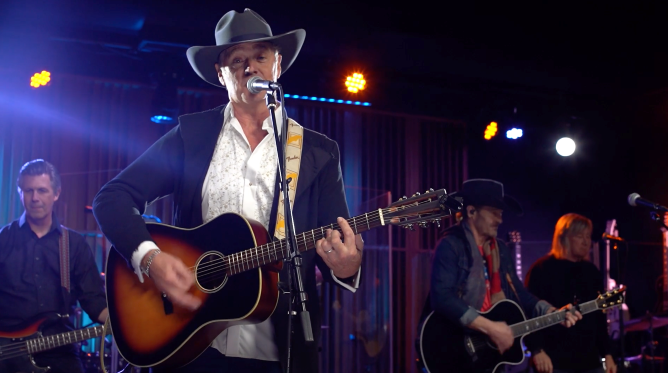 In late February, days after leading President Donald J. Trump’s defense team to a victorious impeachment acquittal, Jay Sekulow was behind his drum kit leading his all-star band through rehearsals at his Nashville production facility. The following day, they were joined by legendary actor and chart-topping recording artist John Schneider and special guest Keith Burns of Trick Pony, for an exclusive live performance of “Theme from ‘The Dukes of Hazzard’ (Good Ol’ Boys).”

Released on Facebook Thursday evening, the “Dukes of Hazzard” with John Schneider and Jay Sekulow’s All-Star Band video received over 100,000 views in the first two hours, and it continues to gain traction. Watch the exclusive performance here:  https://www.facebook.com/JaySekulow/videos/206218037328838/

“’Straightening the curves, flattening the hills’ sounds very familiar these days as America practices social distancing,” says Sekulow. “With that in mind, we wanted to release a music video featuring special guests John Schneider and Keith Burns from Trick Pony. We hope you enjoy this exclusive performance of ‘The Dukes of Hazzard’ theme song with Bo Duke himself. And we’ll will have more videos featuring John and Keith coming soon.”

“I had a blast with Jay and the gang,” says John Schneider about Jay Sekulow. “Not only is Jay a crackerjack attorney, but he’s one heck of a musician too!”

When he’s not arguing cases at the Supreme Court of the United States, testifying before Congress, or serving as the personal attorney of President Donald J. Trump, Jay Sekulow can be found behind his drum set or playing guitar leading the Jay Sekulow Band. What started as a hobby has turned into a stellar lineup with an all-star cast, featuring former members of Kansas, Petra, DC Talk, and more.

Over the past few years, the Jay Sekulow Band has performed with legendary guests such as Ricky Skaggs and Lee Greenwood, and their music videos have been streamed by millions online. The band is known for their unmatched covers of classic hits as well as original songs such as “Hope of Jerusalem” and “Undemocratic.”

ABOUT JOHN SCHNEIDER: John’s extensive acting career includes the iconic roles of “Bo Duke” on The Dukes of Hazzard, “Jonathan Kent” on Smallville and “Jim Cryer” on his current series, Tyler Perry’s The Haves and the Have Nots (now in Season 7). John was also a fan favorite on Dancing with the Stars in 2018. In addition to his incredible acting career, John has over 20 albums to his credit and four #1 singles on the Billboard Country chart. It’s also worth noting that John co-founded (with Marie Osmond) the Children’s Miracle Network. For more info, visit https://johnschneiderstudios.com.

ABOUT JAY SEKULOW: Jay Sekulow is Chief Counsel of the American Center for Law and Justice (ACLJ), one of the most prestigious law firms in the country. He is an accomplished Supreme Court advocate, renowned expert on religious liberty, a #1 New York Times-bestselling author, and a respected broadcaster.