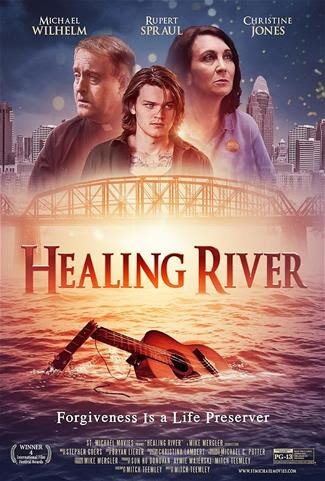 With an average rating of 4.7 out of 5.0, the film “Healing River” has become one of the highest-rated independent faith-based films on Amazon Prime Video. The film has been nominated for fourteen film festival awards, winning four to date, including Best Faith-based Feature at the Burbank International Film Festival. Writer and director Mitch Teemley says he felt “Healing River” was a story he “had to tell.”

“For years I have heard stories about impossible acts of forgiveness,” says Teemley, “and even experienced one of my own while writing the screenplay. I believe people are responding positively to the message of this movie right now because being able to forgive those who have wronged us is desperately needed in our society today.”

“Unlike a typical secular movie, all our characters, good or bad, have a spiritual side they either affirm or deny,” says Mergler. “Like the parables Jesus used, our stories have an underlying point, but the viewer will have to figure it out for themselves. As one reviewer said of Healing River: ‘this is what real life looks like.’ Our goal is to entertain and enlighten.”

Teemley has had a long career in the entertainment industry as a songwriter, singer, actor, and movie producer. His first feature film was with Showtime/Columbia Pictures, and he has played roles in television shows such as General Hospital (ABC) and Checkpoint (NBC). Teemley will also be the lead actor in another soon-to-be released St. Michael Movies’ film, “Promises to Keep.”

Teemley says he believes the “Healing River” story has a greater purpose than just being entertaining.

“I have multiple goals for the film,” says Teemley. “First and foremost, I hope it compels people to take practical, courageous steps toward healing our broken world. That begins, I believe, with the act of forgiveness. And when we pursue forgiveness, we can all become conduits of God’s grace.”

“Our goal is to re-evangelize inactive Christian men to become leaders of their families in the faith,” says Mergler. “We determined that movies would be an effective medium to reach them because mental retention is better when something is both seen and heard. As we have progressed, we realized we needed to make movies that appealed to women because our only hope of getting men to watch them was if their spouses or significant others brought them along to see them. So that’s what we do. We make chick flicks for men.”

Mergler says the ultimate goal for these movies is to counter the underlying immoral attitudes that are being fed to the public by Hollywood films.

“Pandering to the profane and obscene will never satisfy,” says Mergler. “I believe people crave stories that appeal to the higher callings of their souls. Our responsibility is to stand for the truth of the faith against the tide of lies.”

“Healing River” has scored high marks on Amazon and is currently available for streaming on the following platforms: