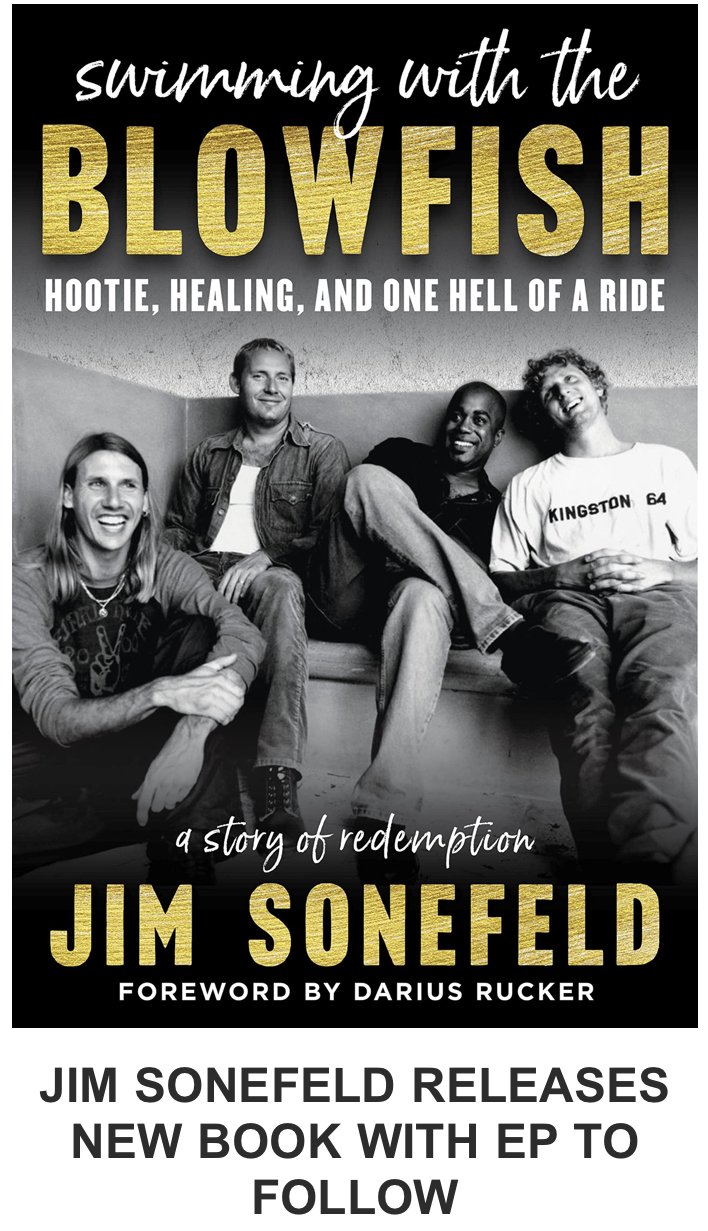 A book that encapsulates a band still beloved by legions of fans, Swimming with the Blowfish is much more—an unpretentious, emotional story of one man’s spiritual path to a more fruitful life. The ultimate front-row seat to the rise, fall, and rebirth of a band that was—for a time—the biggest in the world, Hootie & the Blowfish, and drummer Jim Sonefeld’s shattering and redeeming spiritual path from addiction to recovery and a more fruitful life.

“We loved, fought, cried, laughed a lot, and did whatever it took to play the music that we knew was very distinctly ours. . . . Jim ‘Soni’ Sonefeld has lived a life that is rife with fun and pain, light and darkness, but always with an amazing amount of love. The way he sees the world is one of a kind and his story is one for the ages.” — from the foreword by Darius Rucker

In Swimming with the Blowfish: Hootie, Healing, and One Hell of a Ride(Diversion Books; June 28, 2022; $28.99 Hardcover; ISBN 9781635767674) Jim Sonefeld, drummer and one of the group’s principal songwriters, reveals their humble beginnings, meteoric rise, Grammy® Award-winning musicianship, sudden fall, and ultimate rebirth—and opens his heart to readers about addiction, recovery, and faith.

Jim also has a brand new EP, Remember Tomorrow, on sale July 29th. You can download the electronic press kit (EPK) to listen to selections from it and learn more here.

Jim “Soni” Sonefeld has had a prolific career spanning from touring musician in one of the top-selling rock bands of all time, to award-winning songwriter, to solo artist. As Sonefeld gears up to release his fourth faith-inspired EP, Remember Tomorrow, he has added the title of author to his list of achievements. His memoir, “Swimming With The Blowfish – Hootie, Healing, and One Hell of a Ride,” published by Diversion Books, is available now.

Who Is Jim Sonefeld?

The Hootie & the Blowfish drummer grew up dreaming more of sporting victories than becoming a successful musician, but after that dream came to a close, he immediately began writing songs, performing, and chasing a music dream. The first Hootie & the Blowfish single, “Hold My Hand,” a tune Sonefeld brought to the band early on, helped thrust the band into its great success, and likewise showcases his songwriting ability. In the years to follow, the band would record six more studio albums and receive numerous awards, among them, two GRAMMYS®.

In the early 2000s Sonefeld began relying on drugs and alcohol to feed an emptiness growing inside of him and would struggle to control his substance use. It wasn’t until late 2004 that he finally accepted he was powerless over drugs and alcohol. It was there he made a turn that would save his life and eventually alter his spiritual path. With a sober mind and new clarity, he began writing about his transcendent experience and the journey into healthier, happier living.