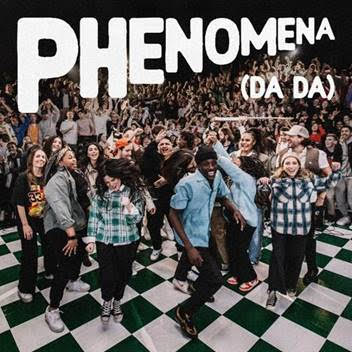 Today, GRAMMY®-nominated Hillsong Young & Free released their newest single “Phenomena (DA DA)” alongside an accompanying lyric visual and live performance video. Recorded in front of a live audience, “Phenomena (DA DA)” encapsulates the feverous energy of a crowd on fire for God’s love. Hard-hitting and melodically anthemic, with a rap interlude, the new track proclaims, “You’ve given me Your vision/ Better than a dream/ You ain’t gotta wake me up/ It’s not a fantasy.”

Set against an enthusiastic, pulsing crowd, the live performance visual and high-energy track deliver the boundary-pushing, classically-contemporary sound Hillsong Young & Free has made their signature.

“‘Phenomena!’ or also known as ‘da da da da da da,’ is a song that gets into your head and into your heart,” says Hillsong Young & Free’s Laura Toggs. “It’s a statement song about the true reality we have in Jesus.”

Hillsong Young & Free’s latest single follows the group’s most recent release of the acoustic version of their hit album, “ALL OF MY BEST FRIENDS.” The original full-length project that released in August 2020 earned the group a 2021 GRAMMY® nomination for “Best Contemporary Christian Album” and marked their second career nomination. Since its debut, “ALL OF MY BEST FRIENDS” has garnered more than 45M global streamsand over 13M combined YouTube views.

Since forming in 2013, Hillsong Young & Free has released a number of highly successful albums and more than 20 singles, acquiring over 545 MILLION YouTube channel views and 1.4 BILLION global career streams (with a 1.1 M global unit career consumption).

With a combined social following of 3 MILLION plus fans, Young & Free has seen eight No. 1 career singles and ten Top 10 singles at Hot AC radio. Their debut album “We Are Young & Free” landed in the Top 25 on Billboard 200 while “Youth Revival” garnered the group its first-ever GRAMMY® nomination for Best Contemporary Christian Music Album (2017). Their recent single “Every Little Thing” hit #1 at Hot AC radio for eight weeks, making it the longest running #1 for the band.

GRAMMY® nominated Hillsong Young & Free is a youth movement born out of Hillsong Church in Sydney, Australia. In this 30-year story, they have seen generations of people serving, leading and pioneering movements. Young & Free is comprised of a collective of young people who come together to make music for youth and young adults everywhere. Their first album “We Are Young & Free” (2013) and EP, “This Is Living” (2015), garnered a No. 1 spot on Billboard Top Christian /Gospel Albums Chart. Their “Youth Revival” (2016) album spawned multiple No. 1’s, landed in the Top 10 on Billboard’s Digital Albums Chart, and garnered the band its first GRAMMY® nomination. Their “III” album (2018) peaked at the No. 2 spot on Billboard’s Top Christian /Gospel Albums Chart and amassed over 170 million streams and 150,000+ units in global consumption. Breakout singles “P E A C E” and “Love Won’t Let Me Down” received positioning on Spotify’s New Music Friday playlist reaching over 2.4M followers while “Love Won’t Let Me Down” hit #1 at Hot A/C. With millions of followers engaging in the social conversation and support from the most prominent music outlets around the world, Young & Free has scored eight No. 1 radio singles and ten Top 10 singles at Hot AC radio.