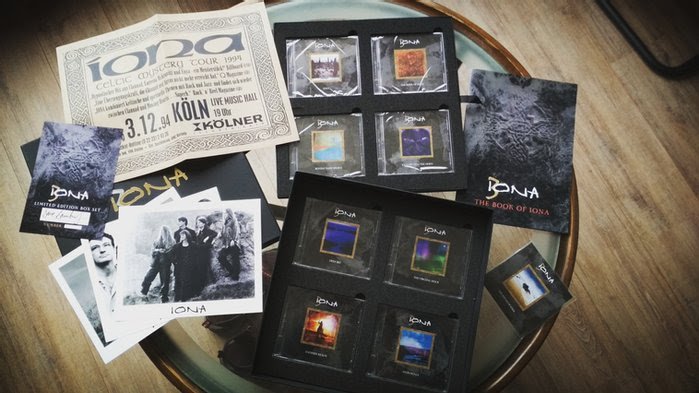 It’s been a long time coming, but the Book of Iona box set from former progressive Celtic Christian band Iona, which has been avidly awaited since June, is finally available.

Dave Bainbridge, who has been snowed under with recording work, announces that the epic 17-CD “The Book of Iona” box set has now been released, and all pre-orders were shipped out almost two weeks ago. The 17 disc set captures not only all the studio albums from Iona, it offers cd4 ‘Snowdonia’ from Iona’s original ‘River Flows’ box set and also features almost the same amount of music on the companion disc for each album.

“This was a mammoth effort on the part of Rob, Hunter and the team at Gonzo Multimedia, who assembled each box set by hand,” says Bainbridge. “We’ve been getting incredibly positive feedback so far as The Book of Iona lands in various places around the globe and it’s been great to read and to see people’s unboxing photos!”

Due to the demand, Gonzo decided at the last minute to have 100 more box sets manufactured, bringing the total to 800. “700 of these have already been accounted for, so do place an order quickly if you want one, Bainbridge states. “It may be possible that Gonzo will get more printed, but at this stage I’m not sure.”

Gonzo has set up a US importer for US fans who want to save on postage. Box sets are supplied by Gonzo, so the shipping times may be a little longer. Here is the link for US orders of the Book of Iona box set: IMPORTCDS.COM