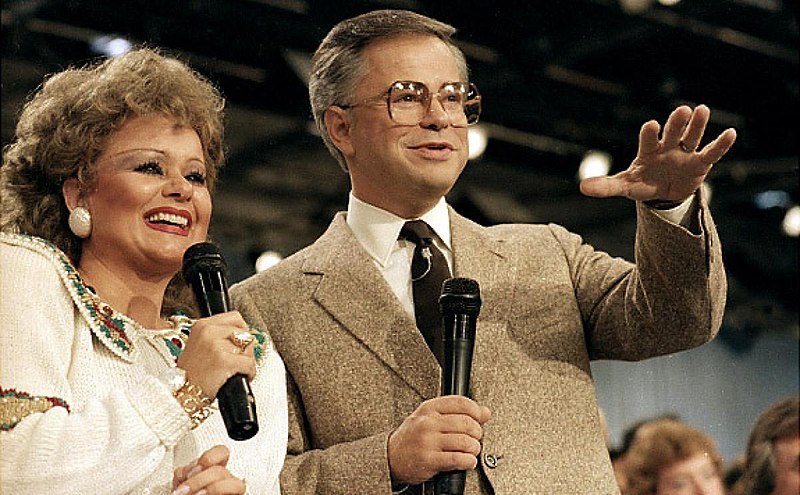 I was never a fan of Jim Bakker and can count on one hand the number of times I have watched Jim and Tammy Faye or Jim Bakker and Lori. Jim Bakker’s constant pleas for money were a huge turn off as were some of the allegations brought against him through the years. Be that as it may, I find this effort by the U.S. government to get Bakker to hand over the names, addresses and details of contributions from his congregation to be of great concern. Even more disturbing is the possibility the government might “test” Bakker’s sermons like fact checkers, a violation of religious freedom. This should not be taken lightly by the Christian community.

To provide the back story, a guest on Bakker’s February 12 show praised a dietary supplement called Silver Solution, which Bakker sells on his show’s website. The guest said that while the product hadn’t been tested on the current coronavirus, it had been found to eliminate similar viruses within 12 hours.

Attorneys for Jim Bakker moved Friday to block “disturbing” government efforts to force his church to hand over the personal details of his congregation — calling it “a very dangerous overstep.” The “heavy-handed” demand by government officials could have broad and “sinister” repercussions for churches across America, warned Pastor Jim Bakker’s lawyers Friday, as they filed a lawsuit in federal court to stop the move. Bakker’s legal team is also concerned that government agencies seek to “test Pastor Bakker’s sermons for truth or falsity” — a potential religious freedom lightning rod.

Three California jurisdictions and the State of Arkansas have demanded Bakker’s Morningside Church hand over its records — including names and addresses of the congregation and details of their financial contributions.

“It’s extremely disturbing that this is happening in America,” said Bakker’s attorney Jay Nixon, former governor and attorney general of Missouri. “It’s a very dangerous and sinister overstep when the government demands the names, addresses and personal financial information of church members. It could be your church next. “Which ministry you donate to and how much you put into a church offering plate is your business — not the government’s.”

A separate lawsuit filed in April in Missouri alleged Bakker and a guest made false claims on an episode of Morningside’s The Jim Bakker Show that Silver Solution health supplement, which is offered by the ministry, could cure COVID-19. Bakker and Morningside strongly deny the allegations and have moved to have the lawsuit dismissed. Similar supplements are sold by Amazon, Walmart, GNC, CVS, and other national retailers.

In the latest development, Arkansas Attorney General Leslie Rutledge, the City of Los Angeles, and two California counties — Merced and San Joaquin — are seeking the names, addresses and financial records of Bakker’s congregation so they can probe deeper.

Bakker’s attorneys believe the latest move was a direct attack on Bakker’s First Amendment religious freedom rights, and the “right of any minister to talk freely to their congregation, without fear that the government will muscle in because they don’t like something the minister says,” said Nixon. Bakker’s lead attorney. Derek Ankrom, a partner in the Springfield, Missouri, office of the Spencer Fane law firm, called it “an affront to religious freedom and the right of church members to freely associate without fear of heavy-handed intrusion or harassment” by government officials.  “It’s appalling that government officials would attempt to violate a church’s constitutional rights, and the privacy rights of its congregation, in such a blatant manner,” Ankrom said.

Last month, Bakker’s wife and co-host Lori Bakker told viewers the 80-year-old pastor had suffered a stroke and would be taking a break from The Jim Bakker Show while he recovers.

Jim Bakker hosted the television program The PTL Club with his former wife, Tammy Faye, from 1974 to 1989. He resigned in the late 80s from the ministry over a cover-up of hush money to church secretary Jessica Hahn for an alleged rape. Accusations of accounting fraud ended in felony charges, conviction, imprisonment, and divorce.

Bakker later remarried and returned to televangelism. He founded Morningside Church in Blue Eye, Missouri, in the Ozark Mountains where he hosts The Jim Bakker Show, which focuses on the end times and the Second Coming of Christ as well as promoting emergency survival products. He has written several books, including I Was Wrong.

What Is the Jim Bakker Show?

Today the Jim Bakker Show is an hour-long daily television broadcast featuring prophetic and biblical revelations brought to light in today’s world. The show is aired through multiple broadcasts on DirecTV, Dish Network and other worldwide satellites.