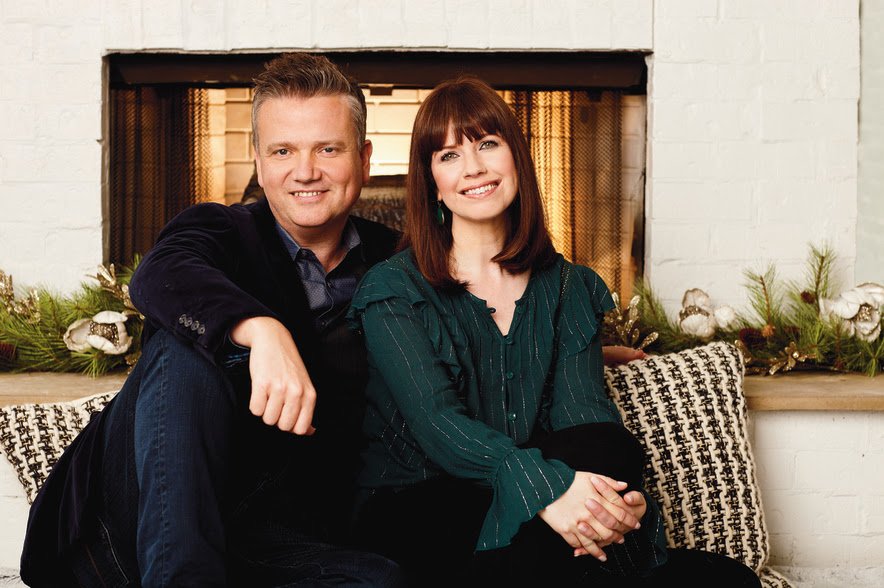 Evensong (Hymns and Lullabies at the Close of Day), releases worldwide on Friday, August 28, 2020, on the eve of the historic first Sing! Global Music Conference.  Keith Getty OBE says, “Evensong, is a project born out of a family tradition.  We close out our days with a time of reflection in thought, song, and prayer.  This collection of hymns and lullabies features a mixture of many of our daily emotions that help us redirect the mind and the comfort of the heart.”

A special concert performance of this new project was recorded at Hidden Trace Farm, Tennessee, and will premiere globally online on Aug. 31 as part of the Sing! Global conference and festival.

Evensong is a dream project for Kristyn Getty. On turning 40, she and Keith decided that this project would be the way she would mark the year. First set in motion early in the year, the global pandemic meant that an album intended to bring comfort to homes at evening time was also recorded during a shelter at home season. Album producer Ben Shive was able to gather recordings from each musical collaborator and masterfully create a project fusing the Celtic, folk, bluegrass, classical, and Americana sound the Gettys have become known for around the world.

The cover art was specially created by internationally renowned Irish artist Ross Wilson.“These are lullabies and hymns we have sung to and for our own children,” says Kristyn Getty of her four daughters. “Singing God’s truth into both the more tender and vulnerable moments of the day has been a centerpiece of raising our own kids. I know I need true words spoken into my heart and mind to help de-clutter all that presses in upon me from day to day.  I hope these songs help people dwell on the Lord and His promises; to release a burdened mind, to calm a restless heart and point us towards real peace in Christ.”

The Getty’s music is sung by over 100 million people in churches each year throughout the world. In 2017, they established the Sing! Movement to encourage families and churches towards deep theology, timeless artistry, and vibrant worship. Rather than canceling in light of the pandemic, the Gettys have rebuilt this year’s event from the ground up to be an immersive, virtual conference engaging leaders, families, and churches around the world.

The annual Sing! conference has become one of the most popular worship events in America in recent years, and organizers have spent the last few months planning how to expand this event to inspire a global audience with theological and artistic excellence. The Sing! Global conference will feature worship sessions lead by celebrated musicians from six continents and will reach tens of thousands of individuals and families from every corner of the earth.

TRACK LISTING FOR EVENSONG (Hymns and Lullabies at Close of Day):Produced by: Ben Shive, Keith, and Kristyn Getty

To learn more about SING! Global Conference or the concert premiere of Evensong, please visit https://gettymusicworshipconference.com/.

About Keith and Kristyn Getty

Keith and Kristyn Getty occupy a unique space in the world of music as leading modern hymn writers. In re-inventing and popularizing the traditional hymn form, the Gettys are championing a catalog of songs that teach Christian doctrine and cross musical genres.

Their hymns are sung throughout the world, with “In Christ Alone” (penned by Keith and Stuart Townend) anchoring their canon of globally-sung songs that includes more than seventy titles listed by CCLI in its US and UK top 2000 lists. Their original publishers, Integrity Music, have estimated that more than 100 million people around the world sing their hymns every year. The couple also tours internationally – their Christmas show plays annually at Carnegie Hall, the Kennedy Center, and is the feature of PBS & BBC television broadcasts. Their hymn tours have played in churches and theatres internationally. They are regular guests at venues from the Grand Ole Opry House to the Royal Albert Hall and have sung for presidents, prime ministers, and the UK National Prayer Breakfast at Houses of Parliament.

This year they launched a new season of SING! arena events across the world, starting in their home towns of Belfast and Nashville. Keith and Kristyn continue to oversee the Getty Music organization with the SING! movement central to their future vision. Recent years have seen the launch of the Sing! book and the annual SING! conference in Nashville, and this year they launched a global online learning program and foundation with the resources to help individual families, and churches sing. Keith was recently awarded Officer of the Order of the British Empire personally by Her Majesty Queen Elizabeth II – the first contemporary Christian musician ever to receive this honor.

Together with their four daughters, Keith and Kristyn live between Northern Ireland and Nashville.

Getty Music exists to create and curate hymns for the 21st-century church. Our passion has always been to join rich theology, timeless artistry, and vibrant singing for the whole family of God in churches around the globe, and the work is expressed through multiple endeavors. Getty Music Publishing, built initially on the catalogs of Keith and Kristyn Getty, is now home for a brand of hymns and a collective of songwriters who share the vision for richer congregational singing, including Matt Papa, Matt Boswell, Matt Merker, and Jordan Kauflin. Getty Music is also deeply committed to educating the church. This includes the annual SING! Conference in Nashville, with more than 14,000 people attending its events in 2019 and over 100,000 watching online as well as other resources including new online initiative Getty Music Plus in both printed and digital form, to help churches throughout the world better prepare for worship each Sunday. Getty Music Touring produces two major tours each year. The hymns tour is presented in churches and now arenas, while the Christmas tour plays iconic concert venues, including annual dates in The Kennedy Center and Carnegie Hall. Getty Music Label creates audio and video recordings by Keith and Kristyn Getty, Matt Boswell, and Matt Papa, the Sing! Live brand, the Getty Kids Hymnal as well as a number of new hymns related products, along with songbooks and sheet music to help churches sing. The label works in partnership with Capitol Christian Music Group and with broadcasters and print publishers around the world from PBS and BBC to TBN. Getty Music is actively committed to a global mission. In partnership with a range of mission agencies, they resource church leaders and provide scholarships for education in the majority world. They also organize an annual Global Hymn Sing, the first of which featured their reworking of the stirring missional anthem, “Facing a Task Unfinished.” All of this serves the vision of encouraging deep believers through the songs they sing.