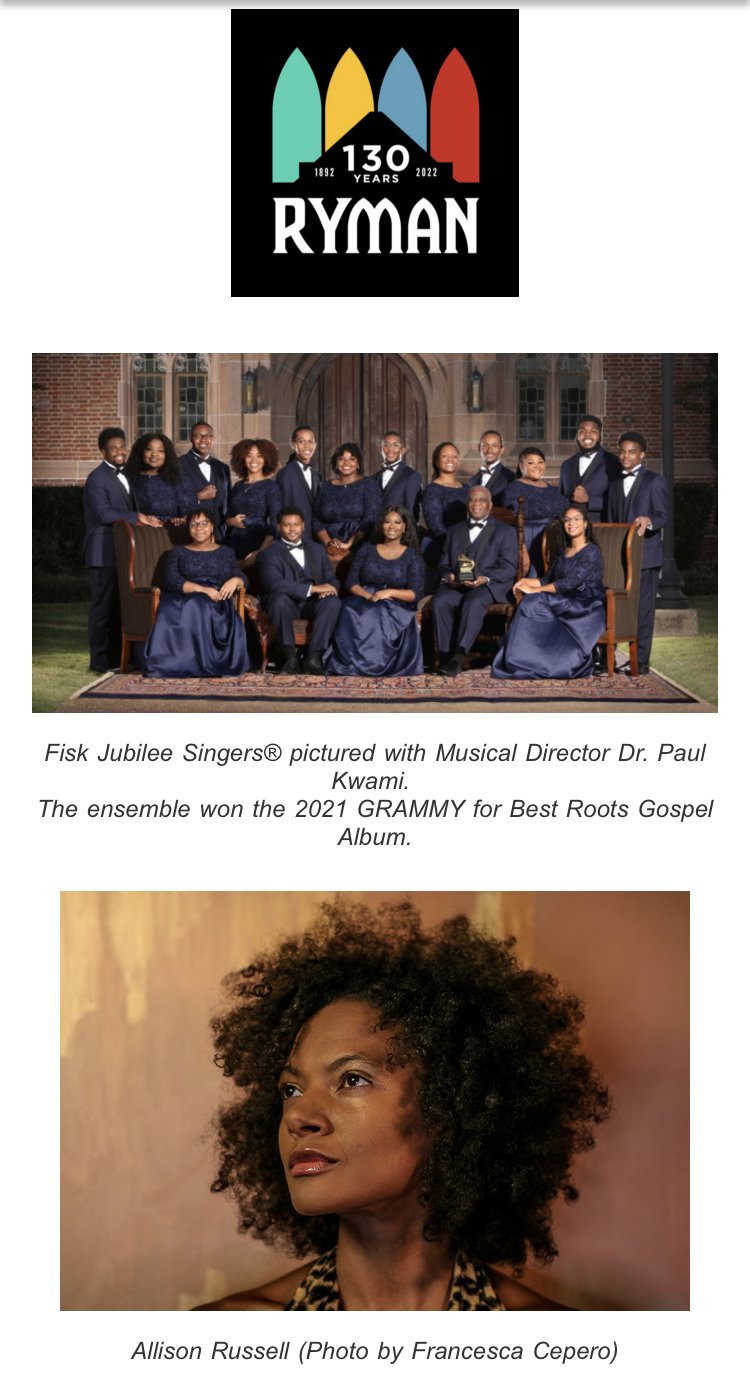 On the heels of celebrating their 150th anniversary, the Fisk Jubilee Singers® will hit another milestone on June 28th, as they usher in Ryman Auditorium’s 130th anniversary on the sacred stage of the Mother Church.

The two Nashville institutions have enjoyed a thriving relationship since 1892 when the Fisk Jubilee Singers first performed at the Ryman during its inaugural year, and will again join forces for a celebratory night of music: “Jubilation! An Enduring Musical Union.”

The multi-award-winning ensemble, who took home the GRAMMY for Best Roots Gospel Album in 2021, will perform during the first half of the program, then support three-time GRAMMY nominee Allison Russell for the second half of the show. Newcomers O.N.E The Duo will open for Allison.

“This is an extraordinary year for the Ryman as we celebrate 130 years, and we couldn’t imagine commemorating the historic milestone without the Fisk Jubilee Singers,” says Gary Levy, General Manager of Ryman Auditorium. “It’s always a special night in Nashville when the Fisk Jubilee Singers perform at the Ryman, much like their inaugural performance in 1892 when they became one of the first musical acts to perform in the building, and we are honored to be a part of their continued legacy.”

“I had the pleasure of meeting Dr. Kwami when we participated in last year’s Americana Honors and Awards show,” says Allison Russell. “We were on our way upstairs to have our portraits taken. As we walked up the steps of that historic stairwell, we came up with this idea together. I’m thrilled it’s come to fruition and I’m honored to be a part of this landmark evening celebrating two iconic Nashville entities.”

Adds Fisk Jubilee Singers’ Musical Director Dr. Paul Kwami, “Two important institutions are celebrating their 130th reunion anniversary. As Ryman Auditorium celebrates this milestone, it also marks 130 years since the Fisk Jubilee Singers first performed in this sacred space in 1892. Both institutions continue to support and enhance the wonderful music culture of Nashville through collaborations with various guest artists. It is, therefore, only fitting that on June 28th, The Fisk Jubilee Singers will present another concert in the Ryman Auditorium with the amazing Allison Russell. This event is important to the music culture of Nashville, and I hope many people will join us in this celebration.”

Proceeds from the event will benefit Fisk Jubilee Singers Endowed Scholarship Fund. Donations to the fund may be made HERE.