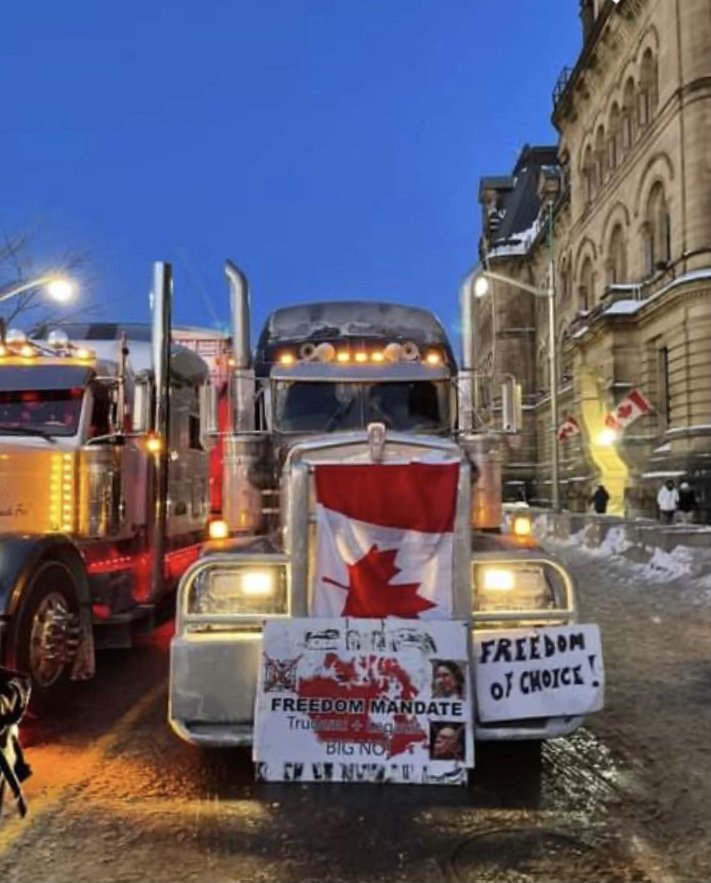 The political censorship publishing platform known as Facebook has been busy banning and blocking groups in support of Freedom Convoy 2022, Canada’s peaceful protest against the COVID vaccine requirements imposed upon truck drivers entering Canada from the U.S. The convoy was originally organized in response to a regulation that requires truckers returning from the United States to show proof of vaccination.

Since then the movement has gained momentum and broadened to include many Canadians who are fed up with pandemic restrictions imposed by their socialist government in general and Prime Minister Justin Trudeau in particular. Trudeau has ironically called the protest an “insult to truth.”

The Freedom Convoy 2022 convoys, composed of several routes traversing all of the Canadian provinces, converged on Ottowa on January 29, 2022. There a peaceful rally of truckers and many other concerned citizens was held at Parliament Hill. The protest continues at the time of this article.

“It’s interesting that Facebook would ban these groups and yet did nothing to ban the Black Lives Matter groups that organized to burn down our cities a few years ago.“

The free-speech platform, Gab.com, has responded by criticizing Facebook’s censorship of the peaceful protest and by offering an alternative platform.

Facebook has spent all week banning groups related to the peaceful Canadian Trucker Convoy as well as any groups working to organize the American Convoy. It’s interesting that Facebook would ban these groups and yet did nothing to ban the Black Lives Matter groups that organized to burn down our cities a few years ago.

In light of these bannings, the truckers have set up groups on Gab to communicate with the world during their protest.  You can click here to find the American Freedom Convoy group on Gab. You can follow the official Trucker Convoy account here. Finally you can join the Canadian Trucker Convoy group here which has coverage from people on the ground.

People are quickly learning that Gab is the only place they can find information about this peaceful protest and real time updates from those who are attending it. Please save this link to learn how to get the Gab app on your phone.

A look at the following articles will reveal a small percentage of Facebook’s heavy-handed censorship of conservative groups in recent years. In addition to blocking and banning groups it doesn’t like, such as the Canadian Trucker Convoy groups, Facebook continues to shadow ban posts by many Christian and conservative voices. Facebook had shadow-banned and labeled as “misinformation” numerous of my own well-researched and well-documented posts on a variety of topics including COVID, COVID vaccinations, and politics.

In addition, Facebook is known for setting up former Facebook employees and then hiring them as “fact checkers” and obfuscating the truth in favor of pushing its own socialist agenda. No wonder it has earned monikers such as “Fakebook,” “Facistbook,” and “Falsebook.”