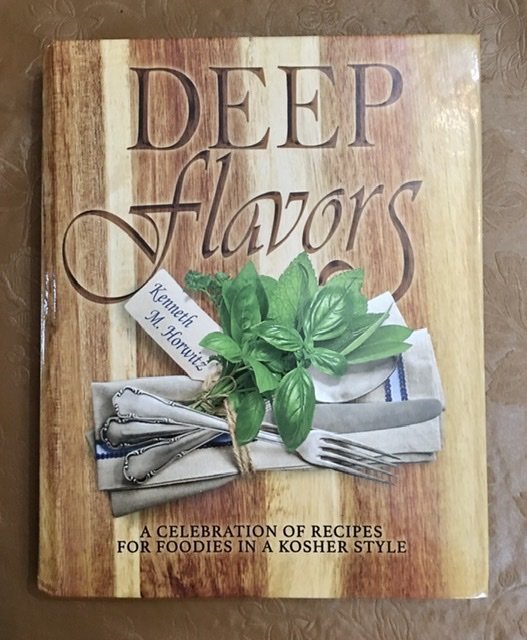 If you love cooking kosher or simply enjoy trying new foods and creating memorable meals in your home kitchen, Deep Flavors: A Celebration of Recipes for Foodies in a Kosher Style from Kenneth M. Horwitz offers an abundance of tempting dishes designed for cooks, whether Kosher or non-Kosher, with helpful tips for proper preparation.

“Cooking is worth some effort and attention to detail,” Horwitz writes. “The positive reactions from family or guests, as well as your own enjoyment, will make it worthwhile.”

“Effort” and “attention to detail,” however, don’t have to equate with “difficult.” In fact, throughout Deep Flavors, Horwitz shares his wisdom for sourcing ingredients and breaking recipes into simple steps — and how to do some of this prep work well in advance so that delicious meals can be served in spite of hectic schedules.

Between the covers of Deep Flavors, Horwitz offers an eclectic menu that includes traditional Jewish dishes plus other regional and international favorites reinterpreted to observe some or all of the rules for kosher foods. The result is a diverse anthology of recipes that will appeal to broad audiences everywhere — Jewish and otherwise.

Horwitz, a CPA by trade, explained in an interview with Today’s CPA that, “My approach to cooking is really an extension of what I do in my professional practice. I solve problems. One of the ‘problems,’ at least in my house, is that since we maintain a kosher house, but eat eclectically, is how to convert recipes so that they are kosher …”

Horwitz’s Texas State Fair Blue Ribbon-winning Spinach/Mushroom Lasagna, for instance, is a completely original vegetarian lasagna accessible to Jews and vegetarians, with a unique twist on ingredients that gives it a complex flavor profile. Even recipes for classic foods such as brisket and roast turkey contain newly imagined taste combinations and techniques to elevate them while maintaining recognizable hallmarks of each dish. Another recipe that epitomizes the standard set by Horwitz, yet remarkably simple to execute, is the Dill French Toast: savory, unique, and delicious.

Horwitz’s ultimate goal was to create recipes that are easy to read and easily followed by any-one with a basic knowledge of cooking. He provides detailed instructions with enhanced explanations and alternatives, additive for both the novice and the more experienced cook.

Less-experienced cooks or those who don’t enjoy spending much time in the kitchen may find many of the recipes in the “Deep Flavors” cookbook a bit intimidating and time consuming,

A Readers’ Favorite reviewer, who gave Deep Flavors a 5-star rating, referred to the book as “… an essential addition to any cookbook fanatic’s collection and to anyone who believes in spending the time and effort to make the ‘food’ experience a real work of art …” However, less-experienced cooks or those who don’t enjoy spending much time in the kitchen may find many of the recipes in the “Deep Flavors” cookbook a bit intimidating and time consuming,

With 51 years in a general tax and transaction practice as a CPA and lawyer, Ken Horwitz developed a creative and focused approach to finding and fixing problems — a skill that translates well to the development of and modification of recipes based on traditional family favorites but tailored to one’s personal tastes and dietary needs.

His professional drive and the care given to his work have earned him multiple awards, including the Honorary Fellow for a lifetime of distinguished service and the 2017 Chairperson of the Year by the Texas Society of CPAs. Currently residing in Dallas, Texas, Horwitz enjoys sharing his passion for cooking with his wife and his children’s families. Horwitz believes that one of the highest compliments he has received came from a longstanding client who uses numerous lawyers. He said, “Ken, you are the only lawyer we use whose work we have not had to fix.” Horwitz’s goal is for Deep Flavors to reach that same standard.