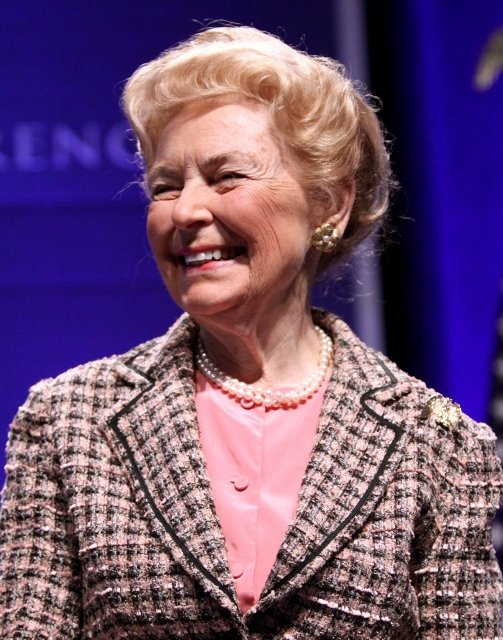 Conservative activist Phyllis Schlafly died of cancer September 5, 2016 at her home in St. Louis. She was 92 years old.

Born in 1924, Schlalfy was a constitutional lawyer, and author who held conservative social and political views, opposed feminism and abortion, and successfully campaigned against ratification of the Equal Rights Amendment to the U.S. Constitution. Her book, A Choice Not an Echo (1964) sold more than three million copies.

Schlafly was best known for her opposition to the feminist movement (and abortion), and her successful campaign to stop the passage of the Equal Rights Amendment (ERA) to the U.S. Constitution in the 1970s. She is credited by many as the driving force that prevented the ratification of the ERA. Schlafly’s concern was not that women might receive equal pay for equal work, but the other aspects of the feminist agenda which she felt would undermine American culture and the family. In hindsight, Schlafly was right.

She is also acknowledged for moving the Republican Party toward the conservative side on family values and religious issues, Her 1964 political book “A Choice, Not an Echo,” sold more than three million copies. She founded the Eagle Forum in 1972 and was the Eagle Forum board chairman and CEO and active on the lecture circuit until her death. She was a respected event speaker as well as on the radio.

Schlafly encouraged Christians to get behind Donald Trump in her final book, “The Conservative Case for Trump.” Written with Ed Martin and Brett M. Decker, the book was released a day after her death. Schlafly looked past the tabloid drama about Trump’s two divorces and other rumors, and described Trump as “an old-fashioned man” with family-friendly policies.

“Christianity is under attack around the world — most dramatically from Islamists, but also insidiously here at home with attacks on religious freedom,” the authors wrote. “Donald Trump has made a point about speaking out against the persecution of Christians abroad and against the left’s political correctness that is trying to ban public expressions of Christianity at home.”

“Phyllis Schlafly will be remembered for her courageous leadership in the face of seemingly insurmountable odds. With the political establishment, the media, and academia all arrayed against her, she organized a grassroots movement that not only stopped the Equal Rights Amendment (ERA) but became the foundation for the pro-life, pro-family movement we have today.

“I have little doubt that the political and cultural landscape of America today would have long ago been devoid of true conservatism if not for her leadership. She never surrendered her principles and she never gave in to intimidation.

“Her love for God and this country drove her to fight for the Constitutional principles that founded this nation. We honor Phyllis for the lessons that she taught us all. I’m proud to have stood alongside her for faith, family and freedom,” said Perkins.