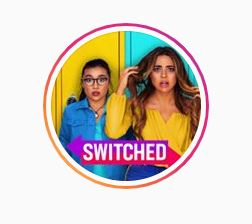 Vertical Entertainment announces the release of the new faith-based film “Switched,” debuting on Digital and Video On Demand September 4 and coming to DVD October 6. From the production studios of Mustard Seed Entertainment and Weider Entertainment, “Switched” features a cast including Miya Horcher (KILLER IN SUBURBIA, “The Rookie”), Madeleine Byrne (“Twenties”), John Schneider (“The Dukes of Hazzard,” “Smallville”), Vanessa Merrell (“Jane the Virgin,” LIKE A BOSS, THE STANDOFF), Laurine Price (“American Crime Story,” “This Close”), Denise Richards (THE WORLD IS NOT ENOUGH, STARSHIP TROOPERS) and Nicole Weider (CATCHING FAITH 2).

Tired of being bullied, Cassandra Evans prays that her nemesis Katie Sharp, the queen bee of social media, would know what it’s like to walk a day in her shoes. Her prayer is answered in an unexpected way when they get “Switched.” When Cassandra Evans and Katie Sharp wake up to discover they’ve switched bodies, the two girls must learn to appreciate both the blessings and struggles the other faces on a daily basis, in school and at home. Packed with life lessons of forgiveness, perspective, encouragement and understanding, “Switched” will help teenagers who are searching for their worth in looks and popularity to find their true identity in Christ.

“SWITCHED has the power to change people’s lives and give perspective to students who are struggling with bullying and comparison in school,” says Executive Producer and Founder of Project Inspired, Nicole Weider. “I am so excited to see the ways this film will positively impact the lives of young women.”

Project Inspired will release bullying resources for students, in addition to companion materials for youth groups, churches and high schools to use alongside the film to teach students about the importance of loving one another.

What Is Vertical Entertainment?

About Vertical Entertainment: Vertical Entertainment is a global independent distributor that offers a unique combination of full-service marketing and sales services. Dedicated to providing highly-effective and collaborative solutions, Vertical leverages unparalleled relationships to maximize revenue across all streams. The marketing and sales expertise from Vertical’s seasoned team gives content partners a wealth of experience minus the studio costs.

Vertical won a Film Independent Spirit Award for Best Supporting Actress for Molly Shannon’s role in “Other People” and the film won a GLAAD Award for “Outstanding Film Limited Release” as well. Vertical also had four other Indie Spirit nominations – three more for “Other People” (Best Lead Actor for Jesse Plemons, and Best First Feature and Best First Screenplay for filmmaker Chris Kelly) and one for Best International Film for Babak Anvari’s “Under the Shadow,” which was also the official UK submission for the 2017 Oscars, in addition to winning one BAFTA Award and three British Independent Film Awards as well.