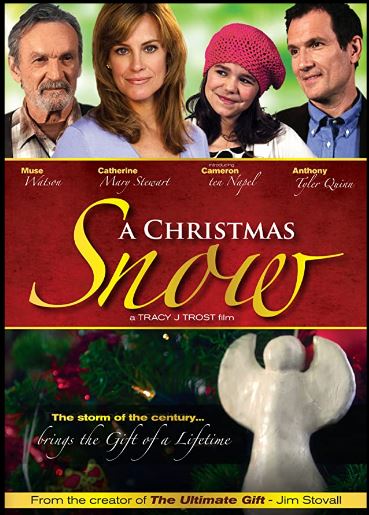 For 30 years, Kathleen (Catherine Mary Stewart) has been haunted by the memory of her father abandoning her and her mother on Christmas Eve. She blames both her parents for her loss and avoids spending Christmas with her mother and stepfather. Not only that, but she has been named a local grinch by the town newspaper because she refuses to celebrate Christmas at her restaurant.

During a surprise blizzard, Kathleen’s fiancé is forced to leave his precocious and somewhat bratty 10-year-old daughter Lucy (Cameron Ten Napel) in Kathleen’s pristine, undecorated home. While picking up supplies for the child, Kathleen almost runs into Sam, an older man (Muse Watson) who later saves her from a mugger but is slightly injured in the process. She invites the older gentleman to stay in her guest room for the night and finds herself stranded at home with two strangers during a power outage for a couple of days leading up to Christmas. Kathleen is forced to confront her pain and her defenses as she deals with two strangers at Christmas.

Lucy is disappointed that she is missing her canceled Christmas pageant, so Sam helps her bring some of the performance to Kathleen. It is a retelling of the Christmas story read from Sam’s Bible. Later Sam tells some of his story to Kathleen, including how the truths in the Bible turned his life around.

This is a lovely, touching faith-based movie, which I found on Amazon. I have watched some 20 or so Christmas movies so far this holiday season, and this is the first one to make me cry.

The acting is decent, and the way the past and present are woven together is interesting. It isn’t fast-paced or very dramatic, but the holiday movie “A Christmas Snow” is a heartwarming story of forgiveness, love, and faith. The movie is G-rated and family friendly.