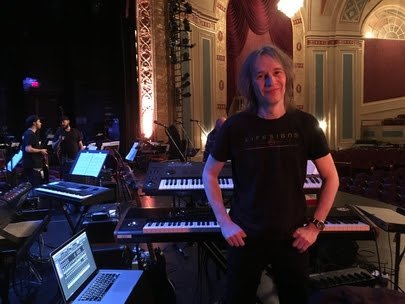 Bainbridge was recently touring on the Lifesigns UK tour, but the following week, measures to tackle the Coronavirus ramped up in the UK dramatically. Fusion Festival and Cruise to the Edge appearances were cancelled as countries around the world went into lockdown. A number of concerts on the Dave & Sally Summer Tour were also cancelled or postponed, as was the Strawbs June tour.

As Bainbridge awaited more cancellations, the enforced lockdown gave him needed time to work on the forthcoming Iona ‘Book of Iona’ box set and the new Open Sky Records Store.

“I’m very pleased to say that the store is now live and the epic 17 cd ‘The Book of Iona’ box set is now available to pre-order,” Bainbridge says. “Not only that, but with the great help and vision of Rob Ayling and his amazing team at Gonzo Multimedia, we are also re-issuing all the Iona back catalog!”

“Currently we have available to pre-order, all the Iona studio albums, several of which have been unavailable for a number of years. These all come with their own companion disk (as found in the box set). Snowdonia (cd4 from the original limited edition ‘River Flows’ box set) is also available as a standalone 2cd release, with the Another Realm companion disk.”

Over the coming weeks, Bainbridge says they will be adding download versions of all the Iona & Dave Bainbridge (solo and collaborative) albums and will also have back in stock the Celestial Fire – Live in the UK dvd/2cd album. In addition, other albums, such as Troy Donockley‘s solo releases and Nick Fletcher‘s ‘Cathedral of Dreams’ are also available from the new Open Sky Records Store.

About the Coronavirus pandemic Bainbridge stated, “I realize that things are very hard both financially and emotionally for most people at the moment, especially those who have lost loved ones to the virus or are at the coal face of the fight against it. However I hope that this long stream of music that I’ve been fortunate enough to be part of will help you to get through these trying times, bringing peace and hope.”