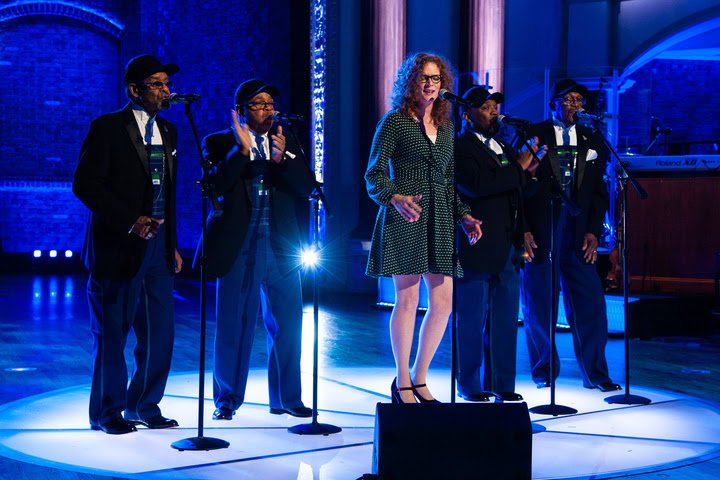 Multi Award-Winning Artist Buller’s Song is Live on Friday, July 17, 2020, on All Digital Platforms from the September 18 release Distance and Time

Dark Shadow Recording artist and IBMA nominee Becky Buller, with special guests The Fairfield Four, releases her single “Tell The Truth (Shame The Devil)” on Friday, July 17, 2020. This is the third single from Becky’s upcoming album, Distance And Time, which is slated for release on September 18, 2020.

“Tell The Truth (Shame The Devil)” is a collaboration with Becky Buller and the GRAMMY® award-winning group, The Fairfield Four.  Having worked with The Fairfield Four on “Written In The Back Of The Book,” Becky had their traditional spiritual and gospel sound in mind when she wrote this song.

Becky Buller states “I feel God moving through the music of The Fairfield Four. It restores my soul! They are the third generation of a ministry that has been sharing the Good News in song for almost 100 years. Working with these incredibly thoughtful, generous, and talented gentlemen has been a great honor, and one of the joys of my life. Collectively, they are a blessing and a treasure.

Becky adds “I want to also send a shout out to my wonderful band, Jon Weisberger (my co-writer on this song) and our producer, Stephen Mougin, for their great work on this track. We sure had a lot of fun with it! Hope y’all enjoy it!”

Tune in to hear the song or download it HERE

Recently, Becky received two award nominations for the 31st Annual IBMA Bluegrass Awards that will be handed out on Thursday, October 1, 2020, in IBMA’s Virtual Award Show and on SiriusXM Bluegrass Junction (CH. 62).

Becky’s debut track “Barber’s Fiddle” reached #1 on the Bluegrass Today weekly chart in May followed by NEEDTOBREATH’s cover “More Heart, Less Attack” that is still climbing the charts across the globe.

The Becky Buller Band is looking forward to seeing everyone on the road as soon as they can.

Who Is Becky Buller?

Becky Buller is an award-winning songwriter and an eight-time International Bluegrass Association Award-winning artist. She made history by being the first artist ever to win in both instrumental and vocal categories at the 2016 IBMA Awards, as well as being the first female to ever win IBMA’s “Fiddle Player of the Year.” Since 2018, Becky has moonlighted with the all-female supergroup, The First Ladies of Bluegrass, which has been recognized recently at the Country Music Hall of Fame with their own exhibit.

Who Are The Fairfield Four?

Known best for their appearance at the end of the film O Brother Where Art Thou, and on the subsequent soundtrack release, The Fairfield Four are still singing in the traditional African American a cappella gospel style they have been known for since the group’s inception almost 100 years ago. John Fogerty loved Fairfield’s rootsy sound so much he decided he had to feature them on his second comeback album, Blue Moon Swamp singing on the track “A Hundred and Ten in the Shade.” Later, after its release, he had the group open for him on many of the tour dates in support of his new CD.

Founded in 1921 in Nashville, TN, The Fairfield Four have maintained their authenticity by carrying on traditional stylings exemplified by the Bessemer Sunset Four, the Birmingham Jubilee Singers, and the Famous Blue Jay Singers with Silas Steele. The Fairfield Four are the recipients of multiple honors including 3 Grammy Awards, (1) Best Traditional Gospel Recording “I Couldn’t Hear Nobody Pray” in 1997, (2) Album of the Year for the “O Brother Where Art Thou” Soundtrack Recording in 2001, (3) Best Gospel Roots album “Still Rockin’ My Soul” in 2016, and two Lifetime Achievement Awards. They were also inducted into the Gospel Music Hall of Fame in 1999.

What Is Dark Shadow Recording?

Dark Shadow Recording is an independent record label based in Nashville, Tennessee. Founded in 2009 by Stephen and Jana Mougin, the label has released music from some of the finest Bluegrass and Americana musicians around the country, including Becky Buller, Rick Faris, Stephen Mougin, The Rigneys, Man About a Horse, and Jana Mougin. The label has a unique approach in that it is run by musicians for musicians, which they believe to be the best approach for releasing quality music and meeting the needs of their artists.