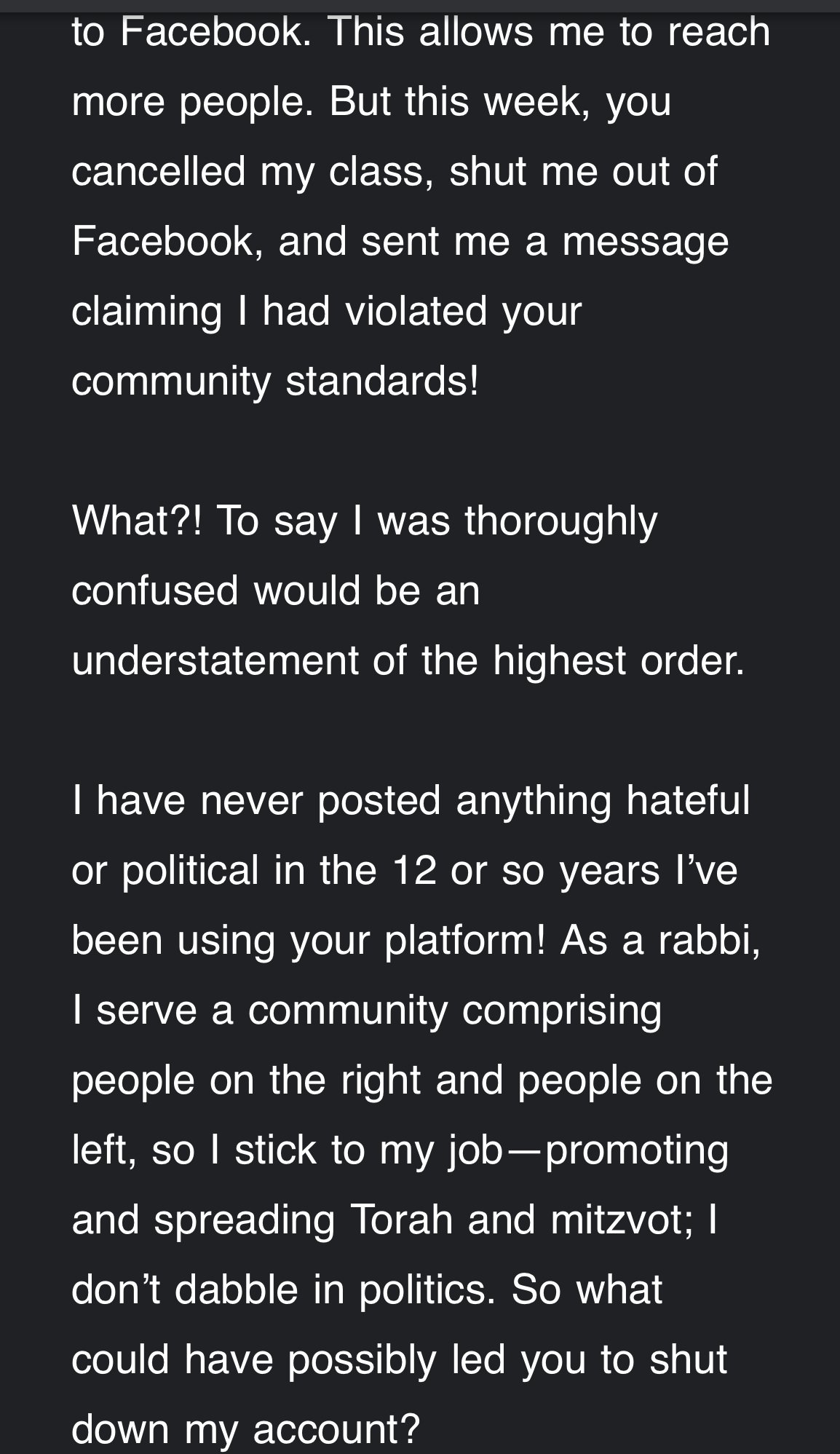 Since the pandemic began, I’ve been giving my Torah classes online. For maximum accessibility, before each class I log into Zoom and connect it to Facebook. This allows me to reach more people. But this week, you cancelled my class, shut me out of Facebook, and sent me a message claiming I had violated your community standards!

What?! To say I was thoroughly confused would be an understatement of the highest order.

I have never posted anything hateful or political in the 12 or so years I’ve been using your platform! As a rabbi, I serve a community comprising people on the right and people on the left, so I stick to my job—promoting and spreading Torah and mitzvot; I don’t dabble in politics. So what could have possibly led you to shut down my account?

“To all who know him, Rabbi Vigler is a teacher and healer who spreads a message of Love and Understanding,” said Parler strategic investor Jeffrey Wernick. “It is inconceivable that Facebook’s content-moderation algorithm cut him off from his congregation and branded his Torah-based message as ‘misinformation that could cause physical harm.’ This action, among others, raises questions about Facebook’s content-curation practices; we see the publisher increasingly taking it upon itself to do its users’ thinking for them. Mr. Zuckerberg should answer the Rabbi’s questions, as well as the questions of other users who fear they will be the next to experience unfair censorship and discrimination—not to mention those who wonder how much content they are not being permitted to see and consider for themselves.”

The censoring of Jewish content by other social network publishers has made recent news. Twitter was criticized last week for suspending the accounts of Jewish users who featured images of the Star of David in their profile pictures. According to articles in the Jerusalem Post, Israel National News, and The Yeshiva World, Twitter said the accounts’ displays of “hateful imagery” had violated the publishers’ Terms of Service.

Since when has the Star of David been “hateful imagery?” The social media censorship on Twitter and now on Facebook looks a lot like discrimination against Jews.

Parler is an alternative to Twitter that was founded in 2018 and has over 3.3 million users. The platform is committed to free speech, does not mine or sell user data, and does not censor content based on politics or ideology. Parler continues to stand with the People and against Technoauthoritarianism.