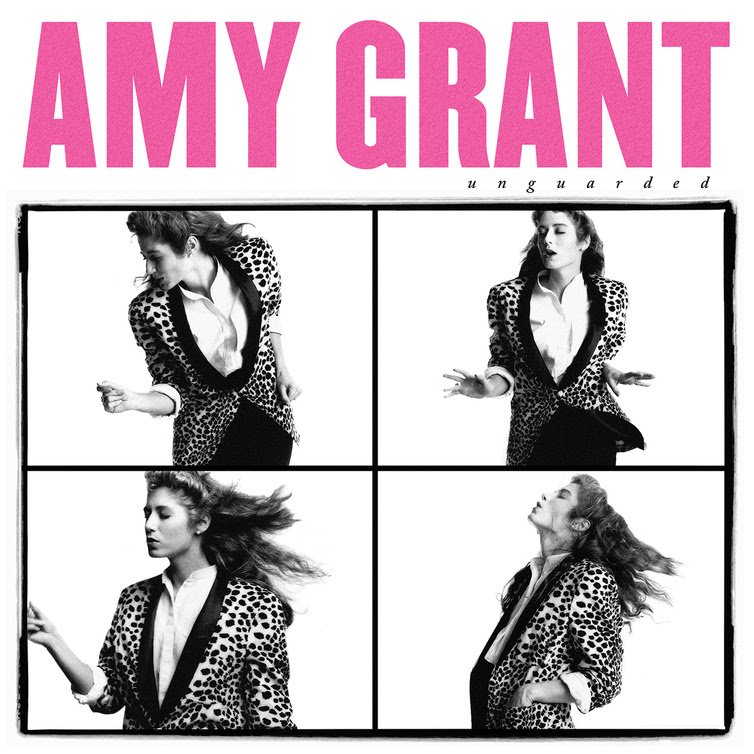 To celebrate the 35th anniversary of one of six-time Grammy winner Amy Grant’s most iconic and successful albums, the Grammy-winning “Unguarded,” Grant is releasing a double disc, white vinyl, limited edition on October 16th. The project will be available through all streaming services on October 30th.

The Unguarded cover featured Grant in her iconic leopard-print jacket that set a fashion trend among girls and young women at the time. Featuring the full original album, along with four live tracks and commentary from Grant talking about the recording process and more, this is a must-have item for fans.  Full track listing is below.

Also this fall, Grant’s Tennessee Christmas will be redelivered on October 23rd, including two songs that were originally Target exclusives, “From the Cold” and “What Child Is This,” while a new recording of Grant singing “The Christmas Waltz” with Mark Martel will be serviced to radio on November 6th.  The song will be available for sale and streaming as a two-track single with “Silver Bells,” Grant, Martel and Michael W. Smith’s 2019 No. 1 Christmas collaboration.

Grant began her career as a teenager, and gained fame in Christian music during the 1980s. Her early hits include hits as “Father’s Eyes,” “El Shaddai,” and “Angels.” In the mid-1980s, she became one of the first CCM artists to cross over into mainstream pop thanks to the successful albums Unguarded and Lead Me On. In 1986, she scored her first Billboard Hot 100 No. 1 song in a duet with Peter Cetera, “The Next Time I Fall.” In 1991, she released the blockbuster album Heart in Motion which became her best-selling album to date, topping the Billboard Christian album chart for 32 weeks, selling five million copies in the U.S., and producing her second No. 1 pop single “Baby Baby”.

Grant’s chart success has been consistent throughout her career with six No. 1 hits, 10 Top 40 pop singles, 17 Top 40 Adult Contemporary tracks and multiple Contemporary Christian chart-toppers. In addition to her six GRAMMY® Awards, Grant has earned 26 Dove Awards (including four Artist of the Year Awards) and has been awarded a star on the Hollywood Walk of Fame as well as the Music City Walk of Fame. Conventional wisdom has it that Grant put Contemporary Christian Music on the map becoming the first Contemporary Christian artist to have a platinum record, the first to hit No. 1 on the Pop charts and the first to perform at the GRAMMY® Awards. With that, her legacy as one of the most influential artists of the past four decades is assured. In April of 2016, Grant celebrated the 25th anniversary of her iconic hit “Baby Baby” with a worldwide release of the song featuring pop sensation Tori Kelly. ‘Tennessee Christmas,’ released in late 2016, marked Grant’s first all-new holiday album in nearly 20 years.

She is the author of several books, including a memoir, Mosaic: Pieces of My Life So Far, and a book based on the popular Christmas song “Breath of Heaven (Mary’s Song)” which she co-wrote.

This past February, The T.J. Martell Foundation – the music industry’s leading nonprofit to fund innovative medical research focused on treatments and cures for cancer – honored Grant with the Tony Martell Outstanding Entertainment Achievement Award at their 2020 Honors Gala.

Grant releases the limited vinyl edition of Unguarded on October 16th. It will be available through all streaming services on October 30th, 2020.