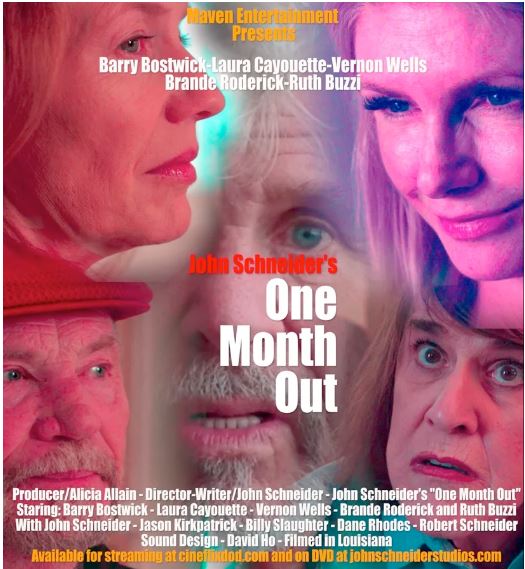 John Schneider’s new film “One Month Out” stars Barry Bostwick, Laura Cayouette, Brande Roderick, Vernon Wells, Ruth Buzzi and Kent Perkins. Written and directed by Schneider, the movie is available for streaming at CineflixDOD.com, and on DVD at JohnSchneiderStudios.com.

Who Is John Schneider?

ABOUT JOHN SCHNEIDER: John’s extensive acting career includes the iconic roles of “Bo Duke” on The Dukes of Hazzard, “Jonathan Kent” on Smallville and “Jim Cryer” on his current series, Tyler Perry’s The Haves and the Have Nots – the #1 primetime series on cable on Tuesday nights. As an independent filmmaker, John continues to write, direct and star in his own films, including Christmas Cars (2019), Stand on It’ (2020), and the new films One Month Out and Poker Run. In addition to his incredible acting career, John has over 20 albums to his credit and four #1 singles on the Billboard Country chart. It’s also worth noting that John co-founded (with Marie Osmond) the Children’s Miracle Network. For more information, visit JohnSchneiderStudios.com.