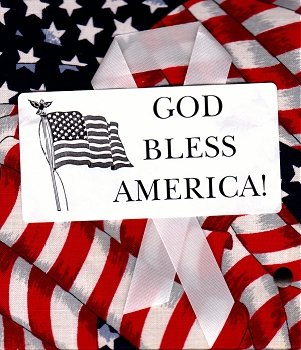 It was a call to action heard ’round the world, spoken with unfaltering courage and resolve by Todd M. Beamer as he joined United Airlines Flight 93 passengers Jeremy Glick, Mark Bingham and Thomas Burnett in a selfless attempt to overpower
the terrorists who had diverted the plane to a path toward our nation’s capitol.

All profits from this tremendously anticipated, genre-spanning collection will benefit The Todd M. Beamer Foundation, whose mission is “to equip children experiencing family trauma to make heroic choices every day.” Beamer’s widow, Lisa, who is now the best-selling author of Let’s Roll, launched the organization to honor United Flight 93 and “to extend Todd Beamer’s legacy of character, faith and courage.”

States Douglass MacMillan, executive director, The Todd M. Beamer Foundation, “The Let’s Roll CD is a coming together of many people and talents with one goal in mind — to help the children affected by the events of September 11. Each artist deserves
many thanks for their time and effort. This CD is a lasting tribute to Todd and all of the American heroes of September 11.”

McAnany, who has worked on recordings that have sold more than 40 million copies, and was an Oscar-nominated executive for The Remains of the Day, began work on the album within days following the attacks, rallying the artists, many whom he had worked with previously. Lisa Beamer wrote a personal note to each, inviting them to participate on a special arrangement of “The
Lord’s Prayer,” the last prayer spoken by Todd Beamer aboard United Flight 93. “It is my hope that the Lord’s Prayer will become our country’s prayer of unity, faith, and hope — regardless of our individuality. As those heroic passengers have shown us, those words can provide peace, comfort, and strength in the worst of times.”

Congressmen J.C. Watts and Tom DeLay, Majority Whip of the House of Representatives, along with a group of Todd’s friends join The All-Star Collective on “The Lord’s Prayer.” It is one of the many special moments that Letï’s Roll conveys.

Let’s Roll: Together in Unity, Faith and Hope is music with a message one year later. McAnany, a former record company executive, formed TMB, L.L.C., as a safe haven for Let’s Roll.

McAnany explains, “As we talked to all of the significant record labels, it was apparent that in order to have the album released with
the utmost integrity and most benefits financially to the foundation, we were going to have to do it on our own, so we created a
company specifically for Letï¿½s Roll. It winds up being a better view of how we, as individuals, all stick together.
“In a lot of ways, I’ve taken my cue from how the men on Flight 93 acted in the last minutes of the flight,” he reflects. “They had a mission to accomplish, so they united and stood together and did their job. And this has been an inspiration for all of us related to the record, whether it’s the musicians, production, songwriting, or the business side of it. Wherever I’ve come up against a critical decision pertaining to the album, I’ve always put it up against that as a benchmark; are we doing the right thing together, as Americans, as people who have faith? And this has been a real key. The record label wouldn’t exist without the support and prayer and purpose from other people.”

In addition, the Robbinsville, New Jersey-based McAnany points out, “You don’t normally get an album with more than two singles on it,” but owing to its multi-genre appeal, several singles will be released to pop, rock, AC, CHR, inspirational and contemporary classical radio formats, including dcTalk’s “Let’s Roll,” 38th Parallel’s “Horizon,” (whose bassist was a cousin to a Flight 93 pilot),
James Curlin’s “I Believe,” Lila McCann’s “Who Else Could It Be?,” Jeremy Lubbock’s “Lullaby” featuring Chaka Khan,” Shane Minor’s “Don’t Ask Why,” and The All-Star Collective performing “The Lord’s Prayer.”

As one might imagine, McAnany has amazing accounts of the miracles and blessings that surround Let’s Roll, along with special
stories about working with each of the artists who donated their time and talent to making the album a reality. They, too, answered
Beamer’s call to action, further inspiring us all to do the same.