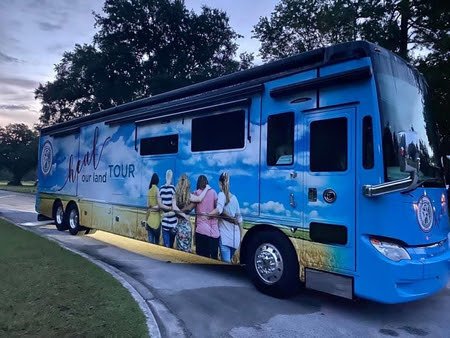 O’Neill became a pro-life activist and a born-again Christian in 1986 at age 38. following the extreme regret about an abortion she underwent while dating a Wall Street socialite after the divorce from her first husband. She also began counseling abstinence to teens. She is the author if 8 books.

“There was a time when people were proud to be Americans, when morality reigned, and our Constitution was actually respected,” said Christie Hutcherson, founder and CEO of Christian conservative group Women Fighting For America (WFFA, www.WomenFightingForAmerica.com), which launched its “Heal Our Land” bus tour of 10 states and the nation’s capital at the end of August.

With the future of America hanging in the balance, women need to step up and speak out, Hutcherson said. “If we don’t rise up now as women — fierce, bold, and strong — I’m fearful for my children and my children’s children. We’re fighting for the soul of America.”

Calling women “the heart of the family, and the heart of America,” Hutcherson said: “We must save America’s children, our values, and our Constitution.”

The grassroots women’s movement says it aims to “bring healing amid the current chaos” by restoring traditional values, educating this generation about America’s Judeo-Christian roots, and protecting Constitutional freedoms.

‘Silent Too Long’
“Right now, evil is seen as good, and good is seen as evil,” said Hutcherson, a mother-of-two and small business owner. “There’s a lot at risk in our nation, and we’ve been silent too long.”

Based out of Florida — a key battleground state in the upcoming election — WFFA plans to have chapters across the U.S., encouraging women nationwide to come together to help shape their communities, run for school boards and other public offices, and speak out on issues at their county courthouse.

The group’s road tour will include events in Tennessee, the Carolinas, Virginia, Pennsylvania, Michigan, Wisconsin, and Ohio — culminating at the National Mall in Washington, D.C., two days before the Presidential election. Events will include speakers as well as prayer for the nation.

A complete schedule of tour dates and locations is posted online at
www.WomenFightingForAmerica.com/heal-our-land-tour.