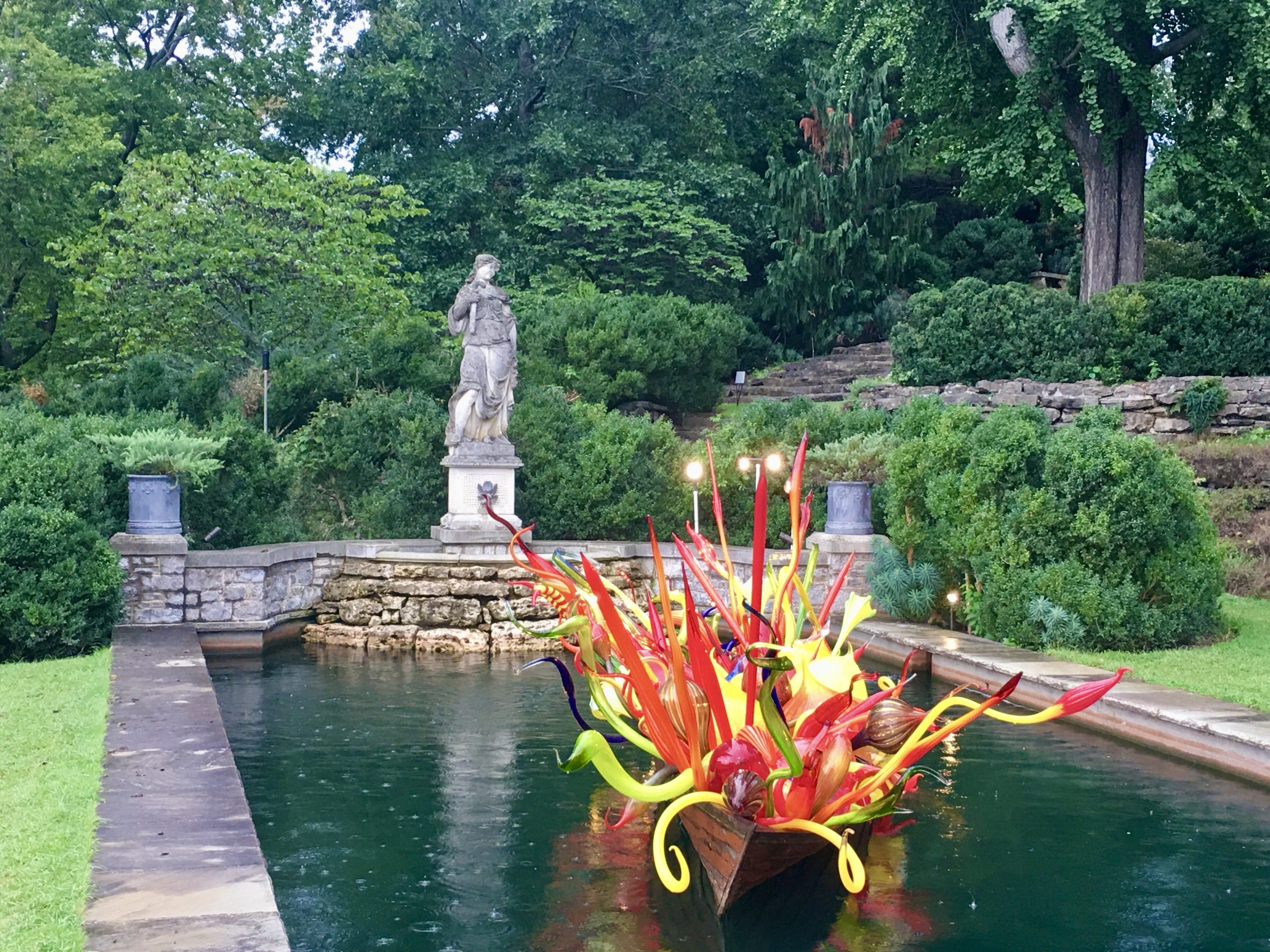 Even in the rain and under overcast skies, Chihuly at Cheekwood glows with vivid color and light. Following its unprecedented success ten years ago, Chihuly at Cheekwood is on display again in 2020 coinciding with the reopening of its acclaimed Carell Woodland Sculpture Trail. The colorful exhibition features multi-media artist Dale Chihuly’s monumental glass sculptures presented throughout the historic estate. Chihuly’s artistry is seen in both its botanical gardens and indoor galleries, including two new works which were designed specifically for the Cheekwood exhibition.

Two of Chihuly’s works have been installed on the Carell Woodland Sculpture Trail for visitors to enjoy during the exhibition. Another is installed in the Great Hall of Cheekwood’s newly renovated Frist Learning Center.

“We are delighted to bring Dale Chihuly’s extraordinary work back to Cheekwood, where his vibrant installations will be in dialogue with the estate’s incomparably beautiful vistas,” said Jane MacLeod, President and CEO of Cheekwood. “For many Nashvillians, Chihuly’s 2010 exhibition marked their first visit to Cheekwood, and a decade later, we look forward to welcoming an ever-growing community to again experience the magnificence of Chihuly at Cheekwood.”

Nearly a decade ago, Chihuly at Cheekwood marked a watershed moment for the estate and garden. The exhibition propelled the institution to an unparalleled level of success, when Cheekwood’s annual attendance doubled from prior years, reaching an unprecedented 360,000 visitors.“I would like to congratulate and thank Cheekwood for bringing back Chihuly,” said Butch Spyridon, President and CEO, Nashville Convention & Visitors Corp.

“The first Chihuly exhibition nearly 10 years ago was an overwhelming success for both Cheekwood and Nashville, and with the rise and prominence of the cultural arts scene in our city this is the perfect time for a return.”

Chihuly’s work has been exhibited at renowned locations across the U.S. and the world, including the upcoming Chihuly: Reflections on nature at the Royal Botanic Gardens, Kew London, Chihuly in the Light of Jerusalem in Israel, and Chihuly Over Venice in Italy.

Cheekwood features special Chihuly Nights admission Thursdays – Sundays, along with regular daytime hours Tuesdays – Sundays. Cheekwood is closed to the public on Mondays. Daytime admission to Chihuly at Cheekwood will be included in the general admission ticket price. Admission to see Chihuly Nights will require a separate ticket. Visitors can enjoy these exotic blown-glass installations of Dale Chihuly displayed in both indoor and outdoor settings for the 10th anniversary of Chihuly at Cheekwood.

Who Is Dale Chihuly?